The issue of transgender equality has become, unfortunately, yet another situation about lgbt rights in which religious right groups seem to be defining the terms of argument, i.e. reducing the argument to an inaccurate, attention-catching point which exploits fear and subsequently finds the lgbt community playing defense.

In this case, religious right groups and spokespeople have pushed everyone's attention on bathrooms and the fear of not being safe in that very private and vulnerable space. While I despise the fact that the lgbt community finds ourselves yet again in another position of playing defense, I am happy with the fact that we are getting rather skilled at fighting from that position.

Buzzfeed proves this point in by spotlighting a drawing created by a transgender teen which turns the bathroom predator myth on its head by adding a little truth to the formula: 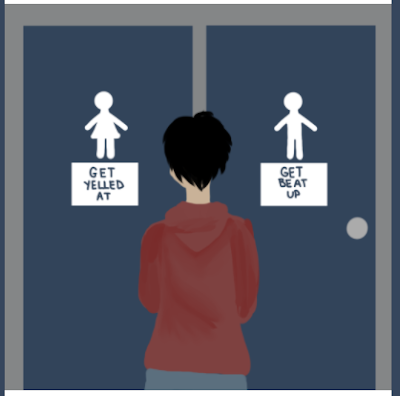 According to Buzzfeed,the drawing, which 22-year-old writer Jason Gross created in 2012, has become "a symbol in the fight for trans bathroom rights."


"It’s good to know that this isn’t just me being a baby and actually resonates with others,” he said. “So if it can help further the movement the way it seems to be doing I’m happy to let it go.”

Posted by BlackTsunami at 3:25 PM No comments:

A Gay Conversion Therapy Survivor Finds Love In This Bold New Film - 'Fair Haven' promises to be good! According to the Huffington Post:

The romantic drama, which hits select theaters Friday, follows James (played by Michael Grant), a young gay man who returns to his family’s New England farm after receiving conversion therapy treatment. At first, James believes he’s been cured of his same-sex attraction, but soon finds myself reconnecting with a former flame, Charlie (Josh Green), as seen in the video above.

The Particularly LGBT Drama of the ‘Moonlight’ Best Picture Oscar Victory - How 'Moonlight' echoes the "the nature of LGBT political advances in recent years."

WATCH: Sean Spicer Repeatedly Gives Bad Answers as Reporters Keep Asking About Transgender Guidance Being Revoked - As this issue moves through the courts, I have a feeling that we will be seeing more of the inability of certain folks to defend discriminatory policies against the transgender community.

LGBT Activists On Trans Student Guidelines: "This Is More Than A Bathroom Issue" - Amen to that!
Posted by BlackTsunami at 9:10 AM No comments: