Just in case you aren't aware, drag queens are now the new scapegoats of conservatives and the right when it comes to accusations of  'grooming' children. We are probably going to be inundated with lies, horror stories and pitifully untrue misconceptions about drag shows, drag queens, and kids.  And I am not simply making that up. These folks will conjure up some of the nastiest, ugliest, most fearful images in an attempt to smear drag culture and the LGBTQ community in general.

Case in point is the following tweet by Seth Dillon. Dillon is the head of the Babylon Bee, a supposed conservative satire news site. The Babylon Bee was recently kicked off of Twitter for 'satirically attacking (misgendering)  Dr. Rachel Levine, the United States assistant secretary for health. Levine is the first trans woman to hold that position. Dillon has been playing the victim on social media and the conservative news bubble because of it.

But I think he has overplayed his hand. Dillon's idea of satire when it comes to smearing drag queens as groomers of children is as droll and basically false as the attack on Levine: 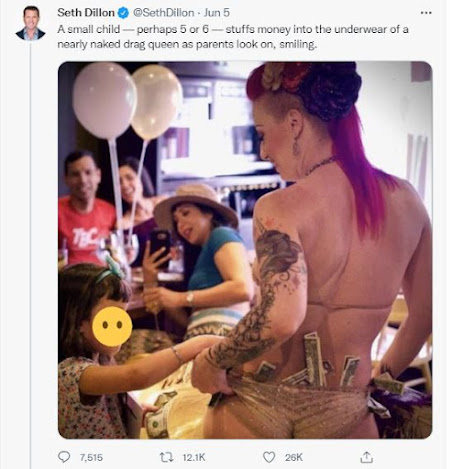 A lot of folks, as you can see by the retweets, was fooled by this claim. That's only because they wanted to be fooled. They hide bigotry and hate behind  a supposed concern for kids. Luckily, not everyone believed Dillon. Someone pointed the truth of the picture: 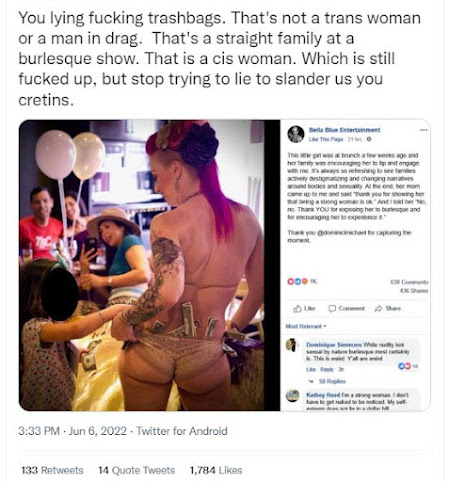 The photo is from 2019 and it involved a cis female burlesque dancer. Here is the link to the article.  Personally, it strikes me as gross, but overall I am angrier at how Dillon is trying to pass this off as LGBTQ people harming children.  LGBTQ people have been physically attacked, injured and killed because of what junk like this encourages people to do. Someone having a general hate of LGBTQ people can easily be spurred to committing violence because of ugly insinuations like this.

And what makes it even more infuriating is how Dillon tries to pick some sense out of his self-created nonsense: 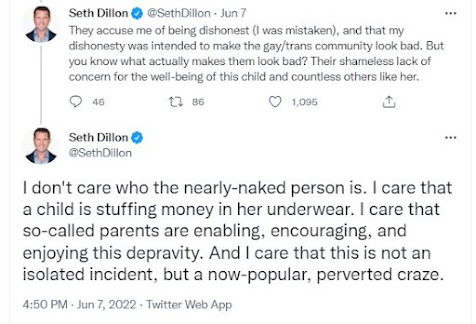 And then not even admit that you were wrong. Even if you didn't mean to lie, your stridency and eagerness to smear drag queens and LGBTQ people in general still doesn't do your credibility any favors.

You are the perverted one here. And a perfect epitome of those on your side of the spectrum. You have crafty ways of disguising your lies and making them sound plausible. But sooner or later the stink from them will always give you away.

None of the things any of you are doing is about protecting children or anyone else. It's about exploiting hate, bigotry, and fear for clout and possibly for your own sadistic pleasures. If you or anyone on your side had any morals, I wouldn't have to tell you this.

Posted by BlackTsunami at 5:14 PM