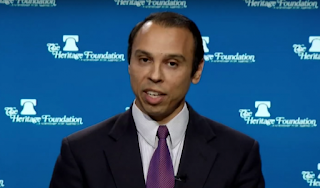 A recent post by People for American Way underscores just how deep the Trump Administration is in exploiting the concept of "religious liberty" as an avenue to foster discrimination, specifically anti-LGBTQ discrimination, and right-wing religious bias.

In a move that brought a startling clarity to the end game for “religious liberty” claims made by Religious Right political and legal groups, the Department of Health and Human Services last week granted a waiver from federal non-discrimination rules to South Carolina, allowing the state to continue funneling tax dollars to Miracle Hill, a child welfare agency that refuses to place foster children with Jewish or Catholic families—or anyone who doesn’t share Miracle Hill’s conservative evangelical religious doctrine. The waiver also applies to all other South Carolina faith-based foster care agencies.

“Under Miracle Hill’s policies, not only Jews are rejected” as potential mentors and foster parents, reported the Religion News Service. “Muslims, Hindus and atheists are also barred from fostering or mentoring children in the nonprofit’s programs; so too are Catholics.” Don’t even ask about same-sex couples, even if they’re Protestant. Miracle Hill has reportedly received millions of dollars from the state and federal governments.


Those watching  the Department of Health and Human Services are not surprised that it came to this. There has been huge cause of alarm since last year that several religious right activists were being appointed to positions in the agency and  were using their positions to further their personal religious agendas. Most specifically, a man named Roger Severino.

According to a  Politico article from last year:

A small cadre of politically prominent religious activists inside the Department of Health and Human Services have spent months quietly planning how to weaken federal protections for abortion and transgender care — a strategy that's taking shape in a series of policy moves that took even their own staff by surprise. Those officials include Roger Severino, an anti-abortion Catholic lawyer who now runs the Office of Civil Rights and last week laid out new protections allowing health care workers with religious or moral objections to abortion and other procedures to opt out. Shannon Royce, the agency's key liaison with religious and grass-roots organizations, has also emerged as a pivotal player.


Severino has been called out by several LGBTQ groups and activists for his actions since being appointed, including attempting to define transgender people “out of existence”


The recent People for the American Way post also said:

What makes this development even more jaw-dropping is that at the very same moment the Trump administration is deferring to the far right and approving this taxpayer-funded religious discrimination, the right-wing Judicial Crisis Network is promoting a video dishonestly accusing Democratic senators of anti-Catholic bigotry over their questioning of judicial nominees. A previous JCN ad attacking senators over their questioning of appeals court nominee Amy Coney Barrett was actually entitled “Catholics Need Not Apply.”

The smears against the senators are false, and reflect a strategy meant to smooth a path to the Supreme Court for Barrett, who some Religious Right leaders have called God’s anointed choice to fill the next vacancy. But in the case of Miracle Hill, an actual “No Catholics Need Apply” rule has been given formal approval by South Carolina’s governor and the Trump administration.


So why is this important? Guess who happens to be policy director of the Judicial Crisis Network? 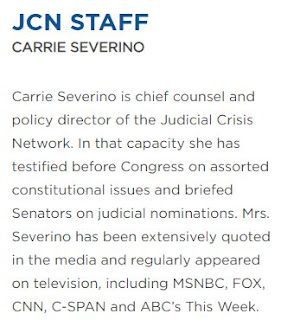 This revelation brings to mind a slightly eyebrow raising passage from the last year's Politico article about the religious right activists at DHHS and their hopes that their regulations will stand in future administrations:

The agency's political leaders understand that a future Democratic administration could reverse some of their own regulations, raising the stakes for future legal battles. According to an individual familiar with their thinking, leaders like Severino and Yoest have celebrated Trump's record number of appellate judges confirmed last year, which have stocked the judiciary with jurists who favor their causes. Severino's wife, Carrie Severino, is a judicial activist who's worked to get Trump's nominees confirmed.


So with Roger Severino inside DHHS pushing for anti-LGBTQ discriminatory and religiously biased regulations and Carrie Severino working dishonestly on the outside with the Judicial Crisis Network to appoint judges who will uphold these actions, we got a serious rigging of the game being attempted here. And NOT THINK that these two aren't well connected in the right-wing money machine. Both Carrie and Roger are or were affiliated with other conservative think tanks in the Beltway.

It's probably not illegal what these two are doing, but it's highly unethical and at the very least most un-Christian.

Posted by BlackTsunami at 4:37 PM