Our friend Paul Cameron was cited in an article today:

Focus on the Family's objection to same-sex parents is grounded in interpretation of biblical scripture and research by Paul Cameron, director of the Family Research Institute in Colorado. Cameron says gays and lesbians are unfit parents, are more likely to molest children of their same sex, switch partners frequently, have shorter life expectancies and cause their children embarrassment and social difficulties.

"Any child that can be adopted into a married-mother-and-father family, that's the gold standard," Cameron said. "An orphanage would be the second choice, and then a single woman."

I liked the fact that the article, dealing with more lgbts in San Francisco adopting children, linked Cameron with Focus on the Family. Unlike our friend Peter LaBarbera and groups like Concerned Women for America, FOF is usually very subtle as to how they cite Cameron.

But I did not like that the article gave no background on Cameron's infamous history of rebukes and censures for his bad methodology.

I sent the article's author an email and she sent me back a very polite reply. I don't think I made myself clear though. My problem was not her citing Cameron but omitting his negative history.

At any rate, the article is still an excellent read. Even though the author omitted Cameron's dubious history, she did include the personal stories of lgbts and their adopted children.

Despite what folks like to claim about us, lgbts have a tremendous commitment to the ideas of family and I commend those who take the responsibility of guiding the next generation.

Sometimes if you give your enemies enough rope, they tend to hang themselves.

Exhibit A of that point: The Traditional Values Coalition

Now they have outdone themselves.

In attempting to defeat ENDA, TVC has lost its damned mind:

“Homosexual Barney Frank’s bill will be devastating to businesses, day care centers, and even religious bookstores,” said TVC Executive Director Andrea Lafferty. “It will force employers with 15 or more employees to accommodate heterosexual cross-dressers, homosexual drag queens, transsexuals and even she-males – individuals who go through only half of a so-called ‘sex change’ operation.”

ENDA will require businesses to accommodate the wishes of these individuals to restroom facilities and even shower facilities – for example in large corporations or production plants.

A she-male? I don't think that term is appropriate for our transsexual brothers and sisters. How does having a personal belief that homosexuality is a sin translate to lying and intentionally using derogatory language to scare people? Perhaps someone can tell me that.

But don't get too outraged because it gets better. The following comic appeared on its web page today. It just defies description. Click on it to see a larger image. 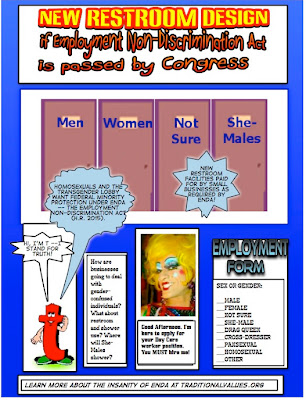 I swear I am speechless. And these people are supposed to be Christians?

Harry Jackson just won't quite, even though some folks want him to

Harry Jackson, that lovely black pastor who is trying to exploit the lgbt community for his own purposes, seem to be getting a degree of backlash.

In Townhall.com, a conservative site, he has written yet a third column attacking hate crimes legislation.

I've been through it before with his lies, so I will not try to refute them this time. But I noticed something highly interesting regarding his comments.

If Jackson thinks he is preaching to the choir, he is sadly mistaken. He is being taken to the carpet by some readers of the site, being called everything from a liar to a race-baiter:

For those who want to defend Rev. Harry, here you go. Take a look at the paragraph on Jackson's findings that African Americans have “innate promiscuity”. How about his race baiting statement that “African Americans are spiritually superior to white Christians, in that their faith is more "integrated" into their everyday life.” Talk about racist. If Jesse Jackson or Al Sharpton would have said this, conservatives would have led a lynch mob toward Chicago and New York. Race Baiters come in all colors and political persuasions.
------------------------------------------------------------------------------------
Hate to burst your bubble Reverend, but you like all the other Reverends before you have been imploring the Black Community to cease and desist from crime especially black on black crime and WHAT? Has it ceased? will they desist? it continues unabated with a myriad of excuses as to why it exist in the first place.The simple answer is Black folks behaving badly, we continue to do it-and I know somewhere there is supposedly some white man somewhere to blame for it, it's our only explanation after four hundred years, or maybe it's five hundred years, no six, it depends on which race baiter you talk too-pick one. "God forbid" religous Black Homosexuals and Lesbians get caught marching in support of this Bill in the "Hood" without police escort, and even with a police escort things could get dicey.

It probably doesn't mean anything but who cares! It's fun to watch!
Posted by BlackTsunami at 2:58 PM

I've been checking out your blog fairly often. It's great. This latest post is something else. A reporter treating Cameron like a serious figure is too much.

I write on AMERICAblog with John Aravosis. He's going to write a post about this for tomorrow. We'll link to you, too.

John has been trying to expose Cameron for years. When is your book coming out? If you're interested, we can probably help garner some attention for it.

If you have some time, send an e-mail with your contact info. The right wing is in overdrive trying to defeat the hate crimes bill and ENDA. They need to be exposed.

I don't think she did her homework, Alvin.

What's sad is that she's not the only journalist to do so..

Nice catch, by the way.

Thanks for your support.

If my next post pans out to anything, it definitely means she is not the only one not doing her homework.

Oh my God! The HRC did more than suck off their intern! Oh my god - fuck u!!!

well that was mature my friend. the only reason why i posted your comment is to demonstrate just how ignorant some people are.

I also received a nice reply from that journalist. I think she realizes that she made a mistake and now it has been corrected. I am glad that the Chronicle made the correction. As you pointed out, it was a good article.

I think, however, that it is unfortunate the some are denouncing her and her work as 'the lowest form of journalism' (which was written at Americablog). She is on our side. She did not use Cameron against us. She gave him as the reason why FOF and other groups are against gays and lesbians adopting. There is a difference here and even people who did not know about the history of Cameron picked up that he is dangerous (as shown by the letter to the editor in the Chronicle yesterday). We need to keep our allies--not belittle them. She made a mistake--who doesn't?

I also got a nice reply from the journalist. And I do see the point as to how fierce the invectives against her and the chronicle was.

But I understand why. Cameron has been a problem for over 20 years. When the young lady cited him but omitted his history, it scared a lot of people. Mainly because it underlined just how uninformed people are about Cameron's lies. Also, I just bet that Cameron would have tried to use the citation for his purposes in trying to give himself some legitimacy.

I hope people realise the kind of world you want us to live in, cencorship for anything that doesn't praise the 'gay' lifestyle that is.

Just look up in the attack at Canada.

On the contrary, I do not want to censor you. I want you to bring your lies to the front so they can be refuted.

Refuting lies is not the same as censorship.