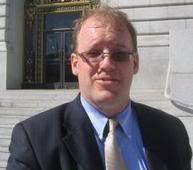 What if you gave a press conference attacking the President of the United States and no one showed up, especially the media?

What if you sue a major hotel chain and no one cares, except for those who oppose you and they only take note to laugh at you?

Such is the lot of self-proclaimed anti-gay activist Peter LaBarbera.

One thing that the lgbt community doesn't seem to be giving that much attention to (with the planning of marches, fighting against anti-gay marriage laws, etc.) is the rapid and continued fall of LaBarbera from steadfast anti-gay activist to man with a serious problem.

The bio on his Americans for Truth webpage brags about his participation in groups such as Concerned Women for America, the Family Research Council, and his short stint as leader of the Illinois Family Institute.

It also talks about how many times he was interviewed by the national media and show such as James Dobson's Focus on the Family.

LaBarbera has gone from those so-called extreme highs to the lowest of low - featuring obscene pictures on his webpage.

No matter how many changes and nuances the religious right goes through, the lgbt community can always count on LaBarbera to attend leather events and "street fairs" with his camera, looking for "filthy images" to publicize on his webpage as an example of the so-called real face of lgbt America. And he always makes sure to give "loving detail" to the acts featured in the pictures.

I'm not one to usually make psychological judgements on people, so don't hold it against me when I call LaBarbera a living breathing Freudian slip.

I would love to know how many have looked on LaBarbera's page and moved from disgust over the pictures to wondering just what is in the mind of the person who took the pictures.

I guess it's better than wondering how many folks looked at LaBarbera's page in attempts to "pleasure themselves." I'm sure there are some of those out there.

LaBarbera is also a perfect example of how stridency can backfire. Uusually when someone falls in the mud, they lift themselves up and try to wipe the mud from their bodies.

LaBarbera has not only remained in the mud, but he has taken the iniative to rub it all over clean parts of his body.

And it is having an effect on his reputation amongst his peers, whether they want to admit it or not.

LaBarbera claims to have spent many, many years fighting the alleged gay agenda but it was the hate group Mass Resistance that was invited to lead a workshop on this so-called agenda during next month's conservative conference, Take Back America.

Also, notice how quickly another anti-gay spokesperson, Matt Barber, has moved up in the religious right food chain.

Barber has gone from fired AllState employee to a spokesperson of Concerned Women for America, to a "dean" at the conservative Liberty University and a promiment position at the equally conservative Liberty Counsel. And to top it off, every now and then, he writes a column for the widely read Town Hall.

And all the while this was happening, the most LaBarbera has accomplished is to fish for donations for his Americans for Truth webpage.

LaBarbera is an embarrassment to the religious right. He is their "Bull Connor," throwing a monkey wrench into their fascade of "love the sinner, but hate the sin."

The only places he is taken seriously is One News Now (which probably publishes his comments out of pity), various conservative blogs (which are as strident as he), and blogs like mine, Goodasyou.org and Pams House Blend (in actuality, we don't take him that seriously. He is good for a laugh or pointing out the hypocrisies of the religious right).

No matter how bad things seem, his bleatings and single minded attempts of "digging deep" into the so-called gay subculture is a reminder of how far we have come as a people. And provides a good laugh amongst me and my friends.

But by no means should the lgbt community dance on LaBarbera's grave. LaBarbera is inflicted with that type of steadfast crazy seen only in horror movies where the monster continues to stalk even after being shot, stabbed, karated, etc.

But all in all, I envision a future where LaBarbera is an old man sitting on a stoop somewhere, his body bent and quivering with age (and hopefully his chin drooling unwiped spittle and corn mush) while muttering about those "damn homosexuals."

Mentally, I think he is already there.

Posted by BlackTsunami at 8:17 AM

And LaBarbera's good friends with Matt Barber. Wonder how that's going. 'Course, he's also good friends with Maine's Mike Heath, and don't they seem like two peas in a pod? Although Mike doesn't seem to be into leather the way Pete is. Idiots, the lot of them.

This was on Pete's site:
AFTAH has now crossed the half-way mark in our goal of matching a generous donor’s $20,000 grant.

Wonder what nutjob gave that money, and why.

LOL. I'd watch my back if I were Barber. Speaking of donations, someone is OBVIOUSLY looking to create a tax write-off if what Peter says is true.

I find him horrifying to watch yet can't look away, just the classic train wreck. I'm glad to see fewer people taking him seriously and him becoming a caricature of himself. I'll tell you, I hope he has to get a real job. Even flipping burgers or being a janitor would be far more of a contribution to the world than what he's done in the past decade.

C.C. asks "Wonder what nutjob gave that money, and why."? He is also pushing the insurance agenda with those he fleeces.

It's always amusing to see how the self-righteous "tolerance" crowd is so transparently in-tolerant of Christians, who are evidently only "good for a laugh." You talk about "pointing out the hypocrisies of the religious right" and without elaborating, show yourself up for the hypocrite you are. The sincerely Christian community believes that sexual deviancy is wrong for both hetero and homosexuals. Their willingness to fight it is motivated by compassion for sinners, while your mocking and jeering is obviously motivated by hatred and intolerance. Hypocrites indeed...

No one should tolerate lies and deceit, even if these things are done in the name of God. Also, I do more than point out hypocrisies. I back up what I say. I noticed that you didn't refute any of my charges.

Lastly, if after all of this, you think that stigmatizing people through fear stories and lies are sincere Christian values, you have worse problems than little ole me.

I wonder how these tired relics of a long dead world fancy themselves as experts on homosexuality? Not that from the looks of them they could get much action.

But they are losing their sick battle against sexual freedom and other freedoms. We recently won inthe Supreme Court. Even Ex Gay has folded. These loons go from defeat to defeat. They will never turn back the clock.