Stopping the anti-ENDA Patricia Mauceri factoid before it starts 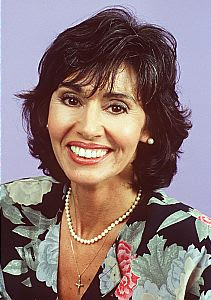 Will this be the face of the anti-ENDA fight?

Yes she will be if Peter LaBarbera and the rest of the religious right has their way.

Here is the scoop:

Actress Patricia Mauceri says she was fired and abruptly replaced for objecting to a gay storyline because of her religious beliefs.

Mauceri played the recurring role of Carlotta Vega on "OLTL" for the last 14 years. But when she objected to how the writers wanted her deeply religious character, a Latina mother, to handle a storyline involving homosexuality, she objected. And for that she claims she was fired.

Mauceri, 59, a devout Christian, told FOX News that character Vega's gay-friendly dialogue was not in line with the character she helped create by drawing on her own faith.

"I did not object to being in a gay storyline. I objected to speaking the truth of what that person, how that person would live and breathe and act in that storyline," she said. "And this goes against everything I am, my belief system, and what I know the character's belief system is aligned to."

And of course before the entire story has come out, the vultures (i.e. Peter LaBarbera and company) have made Mauceri an example of what could happen if ENDA passes:

Reverse Discrimination? How’s this for a timely story for Labor Day — highlighting the current reality that Christians and traditionalists who oppose homosexuality are more likely to be fired or disciplined for their beliefs than homosexuals are for “being gay.” TAKE ACTION: Call your Congressman and Senators next week (202-224-2131; 202-225-3121; www.congress.org) and urge them to oppose ENDA — the Employment Nondiscrimination Act — which would federalize “sexual orientation” law and greatly expand government power to promote the “gay” agenda. ENDA would become a tool for the Left to use the state to force Christian and moral-minded business owners to promote and subsidize homosexuality and transsexuality against their will.

That's right. According to LaBarbera, forget the fact that you are a hard worker. If your boss finds out that you are an lgbt, then that should be reason enough to fire you.

But I digress. Naturally, LaBarbera is going to milk this situation for all it's worth, even posting a few nasty anti-Mauceri comments from a pro-lgbt blog.

Interestingly enough, it's a blog (Joe. My. God.) that for some reason constantly grinds LaBarbera's gears. He has mentioned the blog a few times this year.

Well since I'm not a psychiatrist, I will not speculate about that.

I personally think that people have sense enough to know that lgbts are not monolithic and a few ugly comments on a blog are not indicative of the entire community in general.

To think that would be the same as thinking that every "deeply religious person" opposes homosexuality. I guess that's what got Mauceri in trouble.

If LaBarbera really wants to read ugly comments, he should read what the folks on Free Republic said about President Obama's daughter Malia.

Really though, seems to me that the details of the story (i.e. the gay storyline) is immaterial. This situation has nothing to do with ENDA. Here we have a soap opera actress who has been reminded that she does not have the juice of a Susan Lucci or Erika Slezak. She is not a writer and she took it upon herself to refuse to play a character as it has been dictated to her by the writers and was penalized for it.

Was it fair? Maybe not. But that's life.

But to exploit the situation in order to justify discrimination against lgbts is wrong. Period.

How to counter religious right lies about ENDA

Posted by BlackTsunami at 2:40 PM

As a fan of the show I'm glad she's gone. I liked her but if she is not willing to play a character as written she should be replaced.

I actually saw the episode in question.
First, a brief recap of the storyline: Oliver Fish (Scott Evans, who in real life is openly gay) has just come out to his roomates. He has anxieties about coming out to his parents, whom he believes, being deeply conservative, won't be very accepting.
One of his friends, Christian Vega (David Fumero) buys a book designed to help LGBT folk come out to their parents. His mother finds the book in his possession and wrongly assumes that he's gay.
This is staged as a classic comic misunderstanding, as Carlotta (played by Saundra Santiago) assures her son that she loves him unconditionally and is completely accepting. Christian corrects her and explains that he isn't gay, the book is for a friend.
That's all there is to it.
So what Patricia Mauceri is voicing objection to is the idea that her character would still love her son if he was gay (which it turns out, he isn't.)
I guess we should infer from this that she'd have preferred having Carlotta reject her son?

So I guess refusing to do your job, after all, acting on the show was her job, because of your religious beliefs should exempt you from being fired?

I mean, come on...this lady is a daytime soap actress. I'm sure she hasn't refused to be witness to story lines of divorce, extra-marital affairs, and many other issues that go against her "religious beliefs".

They can use her if they want...but they really don't have a leg to stand on.

Exactly. She was fired over a disgreement with the script. That's usually referred to as "creative differences".

Pretty obvious to me but apparently not to LaBarbera: she was fired withou ENDA being enacted. And for the ridiculous reason of not doing her job. No brainer there.