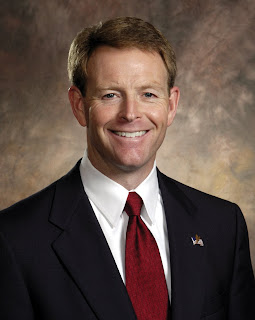 But Jeremy Hooper from Goodasyou.org showed that the person in the case was not only perceived as gay, but also harrassed and fired because of that perception.

The endnotes of his testimony says:

To echo Jeremy Hooper in his denunciation of Perkins, it's a matter of perception.

Perkins is pushing the notion that "if people engage in same-sex intercourse, they face negative consequences."

However, at no time does the Top Ten Issues even imply this. This is what it does say:

LGBT people have some unique health needs and concerns. Unfortunately, many health care providers don’t fully understand these issues, so it’s important to take charge of your health by asking your healthcare provider about the health matters that may apply to you.
The following lists will help you communicate even more effectively with your healthcare provider:
10 Things Gay Men Should Discuss with Their Healthcare Providers
(Click here to downoad .pdf version)
10 Things Lesbians Should Discuss with Their Healthcare Providers
(Click here to download .pdf verson)
10 Things Transgender Persons Should Discuss with Their Healthcare Providers (Click here to download .pdf version)
Now while this medical information breakdown does concede that in some cases, lgbts face bigger health problems than the heterosexual population, at no time does it ever say anything about these health problems being the "negative effects of homosexual behavior."
But it does say few things that Perkins may not appreciate. For example, take the subject of depression/anxiety in the lesbian community:
Lesbians have been shown to experience chronic stress from homophobic discrimination. This stress is compounded by the need that some still have to hide their orientation from family and colleagues at work, and by the fact that many lesbians have lost the important emotional support most others get from their families due to alienation stemming from their sexual orientation.
Or substance abuse:
Research indicates that lesbians may use illicit drugs more often than heterosexual women. This may be due to added stressors in lesbian lives from discrimination. Lesbians need support from each other and from health care providers to find healthy releases, quality recreation, stress reduction, and coping techniques.
Or how about this point regarding how difficult it is for the members of the transgender community to receive adequate health care:
Transgender persons are often reluctant to seek medical care through a traditional provider-patient relationship. Some are even turned away by providers. A doctor who refuses to treat a trans person may be acting out of fear and transphobia, or may have a religious bias against GLBT patients. It’s also possible that the doctor simply doesn’t have the knowledge or experience he needs. Furthermore, health care related to transgender issues is usually not covered by insurance, so it is more expensive. Whatever the reasons, transgender people have sometimes become very ill because they were afraid to visit their providers.
In other words, Perkins made the claim that being an lgbt has "negative health consequences," but cited a pro-gay document which in part said the health problems lgbts face have more to do with dealing with an unaccepting society.
If he weren't so consumed with using the material inaccurately, Perkins would realize that Ten Top Issues actually makes the case for ENDA. Less worries about how you would be perceived on the job as an lgbt leads to less stress. And less stress leads to good health.
Gone are the days when folks like Robert Knight brazenly cited Paul Cameron studies during their Congressional testimony.
But as Perkins proves, members of the religious right still have a way of distorting lgbt lives to suit their agenda.

Posted by BlackTsunami at 4:24 AM

When one goes before Congress and lies, isn't that perjury? Shouldn't this man's lies be countered with scientific evidence and submitted to the Committee so that they can hold him in Contempt of Congress for lying to them?

I would suggest that someone send
the scientific refutation and its attendant backup documentation to the committee members so it can be entered into the Congressional record before the 10 days to do so runs out. We don't want to miss our opportunity to ensure that science based evidence against the religious dogma isn't overlooked by our honorable Congresscritters.
Speaking of Perkins testimony, if someone intentionally lies to Congress, isn't that perjury or contempt of congress and why hasn't Perkins been arrested for it?

I think the situation would be a bit more complicated. I don't think he could be put under arrest.

However, you do have a point with your first suggestion. Do you know how I can go about doing this?

BlackTsunami: Just send a letter to the Chair of the Education and Labor Committee of the Hosue of Representatives with your backup documentation and asked that it be read into the Congressional record.