Should the right to call a fellow employee 'a deviant' be protected under law? 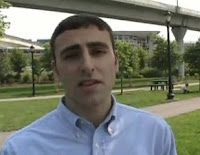 Last week, I talked abut Peter Vadala, a young man claiming that he was fired from his job at Brookstone (a Massachusetts retailer store) for "merely" voicing his so-called Christian beliefs abut a colleague's legal gay wedding.

Well now many religious right groups and organizations have picked up on the story, making sure to make Vadala seem like an innocent victim. The most lurid headline coming from World Net Daily:

Now this incident has sparked a lot of discussion in the lgbt community. I got into a huge discussion with some folks who felt that either the lesbian employee should have kept her mouth shut or that what Vadala said was not ground for termination.

I'm personally of the opinion that Vadala deserved to have some reprimand for to his actions and if that reprimand was his termination, then so be it.

It bothers me, however, that people want to simply gloss over this for the sake of either being overly nice to Vadala or exploiting his situation for their own purposes.

The question remains was Vadala fired for his beliefs?

He was fired for the unprofessional way he expressed his beliefs. 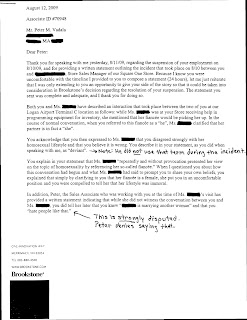 I have a copy of his termination letter, which Vadala provided to the anti-gay group Mass Resistance. Mass Resistance posted the letter on its webpage no doubt thinking that it would help Vadala's cause. In my opinion, it did just the opposite.

From the letter, we learned that (click on the graphics to read the letter):

* in explaining the incident to a member of the Human Resource Department, Vadala contradicted himself.

* another sales associate offered a written letter saying that while she did not witness the incident, Vadala told her about the lesbian employee marrying another woman and said he hates people like that.

If you look at the letter, you will notice that Mass Resistance adds ridiculous editorial comments disputing several claims in it. 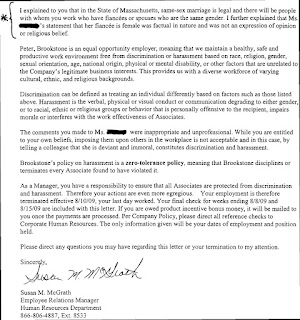 But this is irrelevant. The letter goes on to acknowledge that while Vadala has a right to his religious beliefs, his comments were inappropriate and unprofessional.

I think what is happening here is that people are being blinded by:

* the need to be overly courteous due to a belief that while lgbts seek our rights, we shouldn't seem pushy, or

* the inability to acknowledge that lgbts make up a considerable amount of the American workforce and just like heterosexuals, we deserve the same type of protection.

What if the employee was heterosexual, unmarried, and bragging about her children's success in school.  If Vadala had approached her and said something like "you are denying your child a chance to have a father. You and your children are deviants," there wouldn't be any discussion of whether or not he deserves termination.

Until someone explains to me how this situation is any different from the one I described, then I am all for the notion of Vadala seeking other employment.

Posted by BlackTsunami at 5:11 AM

What bothers me about this story is how frequently his side of the story is presented as the most important side. EVERY sexual harrassment video/training I've EVER been to stresses over and over that the only thing that matters in determining whether harrassment occurred is how the victim interprets it. In other words, his INTENT doesn't matter; all that matters is how she interpreted it. As you point out, her marrying another female is reality. She shouldn't have to pretend it isn't any more than a heterosexual couple should have to pretend they are single. His opinion about it, if it made her uncomfortable, is harrassment REGARDLESS of whether he used the word "deviant" or said he hated "people like that". Whether she felt uncomfortable is ALL that matters. End of story.

I've been pushing folks to look at the termination letter in several places.

I fully expect MassResistance to take it down at some point, because it discredits Vadala's accounting of what happened.

Thanks for getting the word out there, Alvin!

I am somewhat amused by the termination letter, it was total ownage hehe. In my opinion, it was complete justice.

As for the holy liar in the video... he is a holy liar, what should we expect? Truth? The full story? never...

The EEOC is quite clear on what constitutes a hostile environment in the workplace.

I encourage the likes of MassResistance, WND and the rest of the RW parties to challenge this federal rule.

Brookstone's anti-discrimination policy very clearly includes sexual orientation, as do many companies. If Vadala doesn't approve, he is free to work somewhere else (which he now can, having been fired because he blatantly violated the company's anti-discrimination and harrassment policy). As a manager, this is particularly inexcusable.