Right-wing plan against Kevin Jennings: Tell a lie, let it get refuted, wait a while, repeat lie again 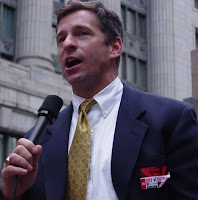 Say what you will about the attacks on Dept. of Education appointee Kevin Jennings, they definitely give a window into the modus operandi of not only the religious right but some facets of the American right in general.

Fox Nation and Big Government are trumpeting the latest smear on Department of Education official Kevin Jennings: that Jennings is, in the words of Fox Nation, "linked to shocking teen sex talk," referring to a recorded exchange that occurred during a "Queer Sex and Sexuality" workshop during a 2000 conference sponsored by Jennings' organization, the Gay, Lesbian, and Straight Education Network (GLSEN).

There are so many problems with this, but here is the big one:

In fact, Jennings reportedly criticized "some of the" workshop's "content" when the recordings were first released in 2000, and the people involved in conducting the controversial discussion -- none of whom were GLSEN employees -- were either terminated or resigned.

And here is the other thing wrong with this incident: it has already been looked at, covered, and dissected by the right - especially the religious right, and has proven to be nothing.

Folks on the right  have been distorting this situation (incredibly named "fistgate") since June as a part of their efforts to hurt Jennings. I covered the situation during that time.

And here is what I said:

Kevin Jennings wasn't even present when the situation took place. His organization, other than co-sponsoring the event where the unfortunate incident took place, wasn't involved in what transpired.

Three state employees, including one Margot Abels, who took part in the discussion was either fired or resigned.

Abels later sued the Massachusetts Department of Education, Brian Camenker (head of the anti-lgbt hate group Mass Resistance), and Scott Whiteman; the two men who illegally taped the workshop and made the taping public,  for "violating her civil rights and the state's anti-wiretapping law."

In 2001, she was not only reinstated but was also given back pay via arbitration. The arbitrator, Marc Greenbaum ruled that:

Abels was not acting on behalf of the Department of Education, but said the department had knowledge of and "supported" her participation in the presentation.

that her participation was "authorized by her superiors, and her conduct, while controversial, did not violate then-established department guidelines."

He also said that the tape was "misleading" because portions of it, which contained "important messages about AIDS prevention, abstinence, postponement, alternative forms of sexual intimacy and the need for students to enforce their own boundaries of personal security," were missing.

Media Matters, in its efforts to combat this nonsense added more prurient details, included the fact that when Jennings was asked about the incident, he voiced disturbance about what took place during the discussion:

GLSEN is also troubled by some of the content that came up during this workshop," said Kevin Jennings, national executive director of the Gay, Lesbian and Straight Education Network.

He said people who run workshops in the future will get clearer guidelines, though Jennings said the network's annual conference at Tufts University should not be judged on the 30-student seminar "What They Didn't Tell You About Queer Sex and Sexuality in Health Class."

"We need to make our expectations and guidelines to outside facilitators much more clear," said Jennings. "Because we are surprised and troubled by some of the accounts we've heard."

He also said that the people who taped the workshop were mischaracterizing GLSEN's message:

"[T]he people who have the tape know what our mission is, they know that our work is about preventing harassment and they know that session was not the totality of what was offered at a conference with over 50 sessions. Our mission is being misrepresented."

This rehashing of a refuted controversy is sad desperation on the part of those wanting to see Jennings fired.

And also extremely tacky on their part to refurbish it as if its something new and shocking.

The only thing shocking about this entire incident is the audacity of Gateway Pundit, Big Government, and all of those involved in this nasty attempt to destroy Jennings's reputation.

These people are going around in circles.

Then there was the lie that Jennings held back information of a underaged child having sex (the Brewster incident) and that turned out to be false. The sad thing about this was that Congressman Steve King and 52 other members of the U.S. House of Representatives sent a letter to President Obama demanding Jennings be fired, specifically for the "Brewster" incident even after King's office was informed that the charge against Jennings was false.

Next came the lie that Jennings advocates pedophilia because he voiced admiration for Harry Hay's early work in lgbt equality (but not his later support of NAMBLA).

And let's not forget the wildest lie - that Jennings advocates murder.

So now we are back at #1, i.e.  the lie that Jennings advocated teaching sexual practices to children.

How long do you think it will be before they rehash the Brewster lie again?

Posted by BlackTsunami at 5:04 AM