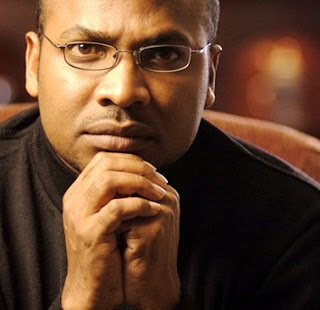 You want to know how Martin Ssempa, a proponent of that awful Ugandan anti-gay bill, tries to convince people regarding the so-called evil of homosexuality?

Ariel Rubin of the Huffington Post gives us a clue. On Jan. 15, Ssempa held a conference to announce a Feb. 15th "million person march" in support of the bill.

That in itself is bad enough. What Ssempa did at the conference is even worse:


A captivating speaker and natural performer, (he was once the East African breakdancing champion), Ssempa clearly knows how to work a crowd. When a reporter asks why he is persecuting adults engaging in consensual acts in the privacy of their own bedroom, he quickly takes out his laptop to expose just what these acts are.


A pornographic slideshow of black and white photographs of men engaging in scatological fetishism is revealed. "I want to show you from their website", he proclaims, a devious smile forming. "I've taken the time to research what homosexuals do in the privacy of their bedroom. It is inhuman, it is animalistic, and it cannot be right. I want to show you these pictures." The audience lurches forward, leering at the pictures and groaning in disgust. Ssempa, enthusiastically goes on:


I want to say homosexuals eat each other's poop. Homosexuals stick their hands into their rectum. Homosexuals stick all sorts of deviant sexual things into their rectum. I want to show you this is from their website. So the first picture that I want to show you, you can see this man has just eaten the other person's poo poo and is rubbing it on his mouth, and I'm going to ask that we print for each of you a photocopy of this story so you get it fully.


Then, of course, they are grabbing each other's gentials, that is level number one, touching each other, grabbing each other. Then number three, now they are licking eachother's anus and are licking poop. And they call poo poo, chocolate. You see it is a change of words. I want you to see, Sheikh please forgive me but I want these people to see, they say a picture is worth one thousand words. This is a man eating the other person's poo poo, can you see that one? Please from BBC, I want you to tell them, we know what they do.

What Ssempa is doing is the equivalent of pointing to the mugshots of African-American criminals (while ignoring the mugshots of criminals of other nationalities) to make the case that black people are inherently more violent.

Now people may want to laugh at Ssempa's behavior but to do such would miss the point.

We can't laugh at Ssempa. It would waste much needed time that should be devoted to exposing him.

In the early 1980s when the AIDS crisis struck and people were panicked, discredited researcher Paul Cameron came to prominence with junk science designed to demonize the lgbt community.

Psychologically, Uganda is at a place now where the United States was then - ignorant and totally susceptible to any demagogue or phony eager to exploit fear and religious beliefs.

I wonder how many of us laughed at Cameron.

Posted by BlackTsunami at 4:43 AM

Yeah, because there aren't any -straight- fecophiles....

I am so offended that the world is calling Ugandans like pastor Ssempa ignorant and backward.How is the fight for globalization realistic in a world where our views and customs are not respected.Just like America and Europe have chosen sodomy as a way to follow,we have deliberately chose heterosexuality.All civilization like the Roman empire that embraced sodomy only set a precedence for their demise.Ugandans should not be demonized for what they think is right.On the issue of privacy,i think it would be the highest mark of ignorance for us to live in oblivion to the fact that all crime like rape,murder ,theft,mention it are done i the privacy and so for you to present a case for sodomy you must equally present a case for the rest.Did you now that or you are just making unnecessary hullabaloos.We will never tolerate sodomy.

Actually the case can be made that the Roman Empire fell after it accepted Christianity. But to do so is playing the scapegoat game and is as silly as the rambling comment you just made.

If you don't think imprisoning people or calling for their executions simply because of their sexual orientation is not only bad but very un-Christian, then I feel sorry for you.

Lastly, you simply cannot compare being an lgbt to crimes such as murder or theft. Note what I said -being an lgbt. Your hang-up on sodomy is ignorant regarding sexual behaviors as opposed to sexual orientation and says a lot about your mindset than anything you can drudge up by way of conversation.

You've just demonstrated that very backwardness and ignorance you're railing against.

Alvin, I just discovered your blog and love it. Thank you for the work you are doing here. I have a similar mission of confronting religious hypocrisy over on my blog, www.gospelaccordingtohate.com

This Ssempa is a sad, sad case.

thank you for your support and I love your blog. I am going to add it to my list of links.

I gotta tell you, I smell a rent-boy in Martin Ssempa's future. He's not just another Pete Labarbara...he's could be the next George Rekers. On the outside, he appears to be so hateful and prejudice, but on the inside, he would alway be more gay than Juan Gabriel in pink spandex. I mean why would a fundamentalist "pastor" keeps "black and white" gay pornography in his laptop computer in the first place and then shows it to his congregation in his church? I bet you after the service, he immediately goes running to the bathroom with a dish rag in one hand and a bottle of lotion in the other. To Ssempra: First of all, be honest to yourself and for who you are instead of keeping your dirty little secrets; Isn't one of the commandments "thou shalt not bear false witness against thy neighbor"? Secondly, do you actually endorse genocide to get rid of us (thou shall not murder)? You will always have rainbow flag waving inside of you.