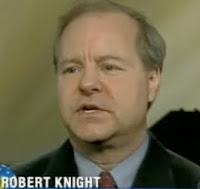 A few days ago, I sent an email to Coral Ridge Ministries writer (and former employee of the Family Research Council and Concerned Women for America) Robert Knight.

I was inspired to ask for the interview due to Knight's recent piece in which he connected the recent House vote on the DADT repeal to a " homosexual conspiracy" to overturn so-called traditional values. This is what I asked:

My name is Alvin McEwen and I am editor and blogmaster of the site Holy Bullies and Headless Monsters.

I am emailing in pursuit of an interview with Mr. Robert Knight.

I read his recent piece regarding DADT and I would like to interview him regarding past comments he made about the gay community, particularly the research he used - most specifically that of Paul Cameron.

If this is a possibility, please get back with me.

Thank you for your time.

Today I received this answer:

We would like to decline your request at this time.

On the surface, it may seem like an insignificant correspondence, but like so many things, there's a lot of work under the surface.

As I wrote in a recent piece, while George Rekers helped to create the junk science that demonized the lgbt community, it was Robert Knight who appeared on talk shows, in debates, and in front of Congress repeating this junk science.

And both men have another thing in common - they both utilized the work of the discredited Paul Cameron, a man who has been rebuked or censured from a plethora of legitimate medical organizations because of his bad research techniques. He is also a man who published "studies" that said, amongst other things, gay men are four to seven more times likely to rape their fellow servicemen in the Armed Forces - that it when they are not wallowing in feces, sticking gerbils up their rectums, and molesting children at a high rate.

Knight even referred to Cameron's work in an effort to defeat ENDA in 1994. So yes, Knight has some explaining to do.

Did he know the facts about Cameron's dubious history?

If he didn't, would he be willing to retract his past dependency on Cameron's work?

Why doesn't he want to talk about it?

It's one thing to oppose pro-lgbt legislation on a religious basis. However it is something entirely different to inaccurately cast members of the gay community as a disease-infested ravaging horde by way of bad research.

For that matter, not just Knight, but every other religious right spokesperson and group who used Cameron in the past and still in the present to claim that "homosexuality is a dangerous lifestyle" needs to start talking.

But they won't if the gay community allows them to pretend as if none of it ever happened.

Posted by BlackTsunami at 2:57 PM

While I agree with your position, did you actually think that Knight (or anyone else for that matter) might have granted such an interview? Based on your name and "affiliation" (I'd never heard of you or your blog), I wouldn't grant an interview either. It's one thing to hear something like "I'm Adam Liptak from The New York Times", but "Holy Bullies and Headless Monsters"? Why would he grant an interview?

Actually in the age of the new media, you would be surprised how common it is for blogs to be able to gain interviews from prominent, pseudo prominent and once prominent individuals.

Also, we aren't talking about James Dobson here.We are talking about someone - Robert Knight - who solicited interview requests from the Coral Ridge Ministries site. One would think that if he was doing this, he wouldn't necessarily turn down someone who took him up on his request.

I have emailed Robert 'Gerbil Cheeks' Knight a couple of times but never heard back from him. I didn't expect to. I agree, lots of people answer emails, so it's always worth a try. I emailed him at: rknight@coralridge.org

Editor's note - if folks are going to email Mr. Knight, please be respectful and courteous. No name-calling and above all, no threatening. That would be rude, nasty, and worst of all, would give him the chance to play the martyr.