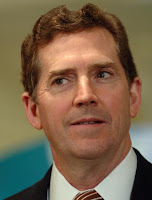 Did South Carolina Senator Jim DeMint return to a position that got him into trouble when he initially ran for the Senate seat in 2004 - the belief that gay teachers and unmarried women should not be teaching children.

Senator DeMint made those comments in a Friday speech during a Greater Freedom Rally at First Baptist North in Spartanburg, SC where he was addressing conservative issues.

“(When I said those things,) no one came to my defense,” he said. “But everyone would come to me and whisper that I shouldn't back down. They don't want government purging their rights and their freedom to religion.”

DeMint was alluding to the controversy he caused when he made the same comments during a debate between him and Democratic challenger Inez Tenenbaum. According to the Huffington Post:


Controversy over DeMint's position on this issue first arose in 2004 during a Senate debate, when he was asked whether he agreed with the state party's platform that said openly gay teachers should be barred from teaching public school. DeMint said he agreed with that position because government shouldn't be endorsing certain behaviors.

After significant criticism from LGBT groups, including the Log Cabin Republicans, DeMint apologized for saying "something as a dad that I just shouldn't have said."

The Post made it a point to elaborate that DeMint never apologized for the substance of his comments, but the fact that they were "distracting."

. . . "making a point about how the media attacks people for holding a moral opinion." "Senator DeMint believes that hiring decisions at local schools are a local school board issue, not a federal issue," he added.

Senator DeMint has a history of making anti-gay comments.

In December of last year, he found the idea of a gay president "bothersome."

In June of 2009, he sent out an inaccurate letter to several pastors and religious leaders claiming that if lgbt-inclusive hate crimes protection were passed, they were in danger of going to jail for simply preaching that homosexuality is wrong.

DeMint, by the way, is in the middle of possibly the easiest re-election campaign in the history of the country. His challenger is Alvin Greene. And I don't think I need to elaborate any further about Greene.

Posted by BlackTsunami at 7:21 PM

How exactly does this fit in with his "small government" mantra? He's advocating less freedom (look back at the name of that rally) and more government interference in people's lives. He's clueless.

Well, I'd be up a creek as a teacher under his rules (except I don't have a boyfriend at the moment, sad day) but strangely, I'm really good at what I do, and to imply that someone can't be a good teacher because of their life outside of their job pisses me off! I honestly only know the marital relationships of maybe 5-7 of my teachers until college. It really didn't matter, what mattered was if they were teaching me something.

Below is a protest letter I faxed today to DeMint.

This regards your repeated remarks that gay people should not be allowed to teach school. I object to them because that kind of discrimination against a minority violates the Pledge of Allegiance’s promise of liberty and justice for all.

I hereby challenge you to face me on national television and explain why I shouldn’t be allowed to teach. I studied at Master’s level at Harvard University and speak German, French, Spanish and Italian. I have published two novels. The phrase “By Scott Rose” has appeared in over 1,000 venues including Strings, (a publication for *students* of string instruments), The World Scholar (a publication for *students*), Bon Appétit, The Journal for the Study of Anti-Semitism, ShowBoats International, Decanter, Opera News, the New York Blade, Girlfriends, Caviar Affair, the Advocate, Relish’s The American Table and Mia/Enas, a magazine for Greek Americans. I have taught with conspicuously positive results. I have for example guest lectured on the arts in journalism at Brooklyn College. The students loved me. I gave them pointers on how to break into journalism and subsequently learned that some of them have done so.

When you demonize minority members of American society, saying they should not be allowed to teach school, you contribute to the terroristic atmosphere of hatred that results in gay students and teachers living in angst and in some cases even committing suicide. It is therefore most ironic that you of all people have served on a U.S. Senate Subcommittee for human rights. Recently in Tennessee, a lesbian couple found their house burned to the ground and the word “Queer” spray-painted on a remaining adjacent structure. Your demonizing of gay Americans contributes to the ongoing occurrence of such hate crimes. Do you intend to behave responsibly to stop the hate?

In addition to facing you on national television, I intend to organize a group of GLBT teachers from around the country to meet with you in Washington. I will not rest in my campaign to reverse your bigotry until you 1) retract your statement; 2) apologize for it and 3) commit to fostering atmospheres of diversity and acceptance in U.S. schools nationwide.