Phony Christian gets DESTROYED over Medal of Honor comments 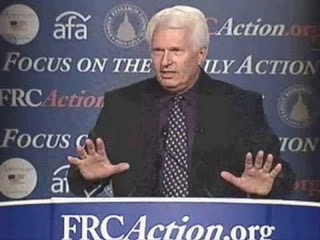 Regardless of what the religious right says, if Christianity is suffering problems in this country, they shouldn't blame the lgbt community.

Perhaps some of these folks should look in the mirror.

We have phony Christians praising countries who would persecute lgbts, relying on fear tactics and outright lies, and finally as the piece de resistance, not only criticizing soldier for saving lives rather than "killing the enemy" but at the same time, totally disrespecting women.

One that last note, I speak of the American Family Association's Bryan Fischer and his recent comments about Medal of Honor recipient, Army Staff Sgt. Salvatore Giunta.

Guinta received the Medal of Honor for saving members of his squad during the War in Afghanistan on October 25, 2007.

However, Fischer criticized the awarding of the Medal of Honor to Giunta.

Fischer is known for saying hatefully outrageous things in the name of God, but I think even he will admit that he went too far with this:

We have feminized the Medal of Honor.

. . .When we think of heroism in battle, we used the think of our boys storming the beaches of Normandy under withering fire, climbing the cliffs of Pointe do Hoc while enemy soldiers fired straight down on them, and tossing grenades into pill boxes to take out gun emplacements.

That kind of heroism has apparently become passe when it comes to awarding the Medal of Honor. We now award it only for preventing casualties, not for inflicting them.

So the question is this: when are we going to start awarding the Medal of Honor once again for soldiers who kill people and break things so our families can sleep safely at night?

While I hate to point this out, Fischer's inference is inaccurate. During the course of saving his comrades, Giunta did in fact kill one of the enemy soldiers and wounded another.

Fischer, who to my knowledge has never served a day in the Armed Forces, has been called to the carpet all over the place - from the blogsphere, to the editorial pages, to the evening news.

And as such it should be. This is a free society where every man has a right to express his opinion. But you should expect some type of verbal blow back if your opinion makes no logical sense or infuriates many people.

Fischer's opinion in this case more than fits the bill in both descriptions. He is even catching hell on the American Family Association's webpage.

The comments below his piece are many and they are all, shall we say, questioning Fischer's Christian virtues:

As disgusting as I find this post, I am exiting the page with a smile on my face because of how uplifting I find the comments here. Christians, Mormons, atheists, soldiers, EVERYONE is on the exact same page.

This is unbelievably twisted logic, and a dramatically false interpretation of the Christian gospel. Go back to the Bible and read a little more, and while you're at it -- beg forgiveness from all the brave Medal of Honor recipients you have insulted, and all the feminists you have enraged.

Like the scorpion that would rather sting and die than not sting and live. There was only one reason for this disturbing article.... A deep seated jealousy and insecurity about his "manliness" Oh the fact that Pres Obama gave the award had something to do with it. Its that same twisted logic used on Senator Kerry. He went to Vietnam and risked his life, Bush pulled strings and got out of it. Bush never fought in a war, thats why he started one, so he could be macho ... By the way Jesus walked around in Bare feet slept on the ground ,helped the poor and was humble. Jesus was love incarnate. He was also celibate .. I guess he wasn't a real man, never had a woman

Why hasn't the AFA taken this down? There is more than enough evidence to prove that not only that his facts are plain wrong and his theology completely backwards, but his opinions are completely detrimental to any sort of credibility you hoped to have as well. This is a major failure on your part that this even got it past editing. How many more comments do you need to fill your quota? Here's +1. Also, Mr. Fischer: You need to put the Xbox down for a bit. The Medal of Honor isn't an achievement you can unlock if you kill 1,000 Afghanis.

Unbelievably revolting. If I had read his article on a comments section rather than a website, I would have thought it was a troll just trying to piss people off. Sadly that isn't the case. And to use the word 'feminization'? As if it masculine to kill people? Just an FYI: Jesus had a zero kill-count. I think one commenter nailed it on the head: "Amazing. You've managed to enrage Christians, atheists, Republicans, Democrats, Conservatives, Liberals, the pro-war crowd, the anti-war crowd, men, women, veterans, conscientious objectors, and this is just the beginning of the list. Not since 9/11 have I seen so many people united in the face of one horrible deed."

When you have one (Congressional Medal of Honor) around your neck ,your opinion might matter. Until that day I invite you not to belittle the sacrifices and actions of those who have earned this Honor.

"So the question is this: when are we going to start awarding the Medal of Honor once again for soldiers who kill people and break things so our families can sleep safely at night?" I'm sorry, this is a Christian website and you're claiming we don't glorify killing people and breaking things enough?

My father was a U.S. Army Ranger at Pointe du Hoc (note correct spelling) and both he and I think you are a colossal idiot. Of course, he only won two Silver Stars, one Bronze Star, and two Purple Hearts, so maybe he doesn't know what he's talking about.

If you think that what Salvatore Giunta did wasn't "manly" enough, I'll pay for your plane ticket to Afghanistan so you can take his place. I'm willing to bet an entire year's salary that you wouldn't last five minutes before you were begging to be put back on a plane to America, much less save the lives of your comrades in the same way this man did.

Amazing. You've managed to enrage Christians, atheists, Republicans, Democrats, Conservatives, Liberals, the pro-war crowd, the anti-war crowd, men, women, veterans, conscientious objectors, and this is just the beginning of the list. Not since 9/11 have I seen so many people united in the face of one horrible deed. Congratulations, Bryan. I hope your follow-up post will be a resignation letter.

Posted by BlackTsunami at 10:33 AM

The comments give a rare insight that Fischer is an idiot and always has been. Why they even give an ass like that a public forum is beyond me.

Of course Fischer is an idiot,that's stating the obvious!