If Matt Barber hates gay sex so much, then why does he keep talking about it? 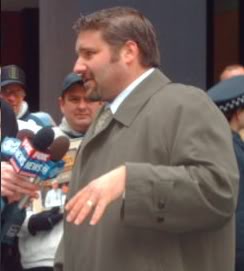 One organization profiled by the Southern Poverty Law Center for its anti-gay dogma - but not designated as an official anti-gay hate group - was the religious right lawyer consortium, the Liberty Counsel:

Created in 1989, Liberty Counsel is affiliated with Liberty University Law School in Lynchburg, Va., a legacy of the late conservative icon Jerry Falwell. It was founded and is still chaired by Mathew (Mat) Staver, who also serves as director of the Liberty Center for Law and Policy at Liberty University, and provides legal assistance with regard to religious liberty, abortion and the family.

The organization may be best known for its campaigns to ensure that “public displays of religion” are maintained during the Christmas holiday, and it has adopted broad right-wing views, including the allegation that the Obama Administration has a “socialist liberal agenda.” But it also has focused heavily on anti-gay activism.

In 2009, J. Matt Barber, formerly with Concerned Women for America and Americans for Truth About Homosexuality joined Liberty Counsel as director of cultural affairs (also becoming Liberty University’s associate dean for career and professional development). A year earlier, Barber had argued that given “medical evidence about the dangers of homosexuality,” it should be considered “criminally reckless for educators to teach children that homosexual conduct is a normal, safe and perfectly acceptable alternative.”

The Counsel also has been active in battling same-sex marriage, saying it would destroy the “bedrock of society.” In 2005, the group’s blog said: “People who … support the radical homosexual agenda will not rest until marriage has become completely devalued. Children will suffer most from this debauchery.” A 2007 blog posting said same-sex marriage would “severely impact future generations.”

Like other anti-gay groups, Liberty Counsel argues that hate crime laws are “actually ‘thought crimes’ laws that violate the right to freedom and of conscience” — an opinion rejected by the Supreme Court. In fact, the laws raise penalties for crimes already on the books — assault, murder and so on — that were motivated by hatred of people based on their sexual orientation. They do not, and could not under the Constitution, punish people for voicing opinions.

Since 2006, Liberty Counsel has also run its “Change is Possible” campaign with Parents and Friends of Ex-Gays to protect people who say they’ve changed from gay to straight from “discrimination” by “intolerant homosexuals.”

You will notice that the profile mentioned the name of J. Matt Barber and this is important. Barber is right-wing creation through-and-through.

In 2005, he lost his job at AllState Insurance in part for penning an anti-gay column. Since that time, the story was spun that he was fired due to his beliefs  However, like all religious right stories of gay persecution, there are details omitted (such as Barber using AllState Insurance equipment to write his column or him identifying himself as an employee of AllState in the same column). To paraphrase critic Mary McCarthy's famous statement on playwright Lillian Hellman, just about all of Barber's tale of being a victim of the "gay agenda" is a lie including the words "and" and "the."

But Barber parlayed that narrative into cinchy gigs with Concerned Women for America, the Liberty Counsel, and a book deal (a book, by the way, sporting a cover which made him look like a sleazy Las Vegas lounge singer rather than an upstanding "culture warrior"). And along the way, he has raised many eyebrows with the ways he has chosen to denigrate the lgbt community, including:

saying that lgbt-inclusive anti-discrimination laws are a  bad idea because:


“Imagine, if you will, a 280 lb linebacker who likes to wear a dress and high heels and lipstick, you know comes to church wanting a job at the front desk as a receptionist and they turn him away because they don’t feel that that represents their values or the image that they’re trying to hold at that church, under ENDA they could be held accountable for discrimination against that individual.”

slurring the name of an Obama appointee in a pitiful attempt to be clever,

telling a highly dubious story about a gay man sexually assaulting men in his military unit, and

comparing lgbts and progressives in general to idol worshippers and child sacrificers of Biblical times.

But it is in the area of "criticizing," i.e. talking about gay sex where Barber has made a, shall we say, niche for himself.

During one of those annoyingly dreary "God is telling us to take back America" conferences in September of last year, Barber not only used Nazi imagery* (see end of column) to describe lgbts but also dismissed notions that those arguing against homosexuality should use only religious arguments. Reportedly, he urged attendees to


. . .focus on the “ick” factor around gay sex and on claims that homosexuality is a health threat, which he called the movement’s “Achilles heel.”

And apparently he truly believes this because Barber will always be remembered for saying describing gay relationships as:


“one man violently cramming his penis into another man’s lower intestine and calling it ‘love."

If Barber continues on the road he has paved for himself,  the Liberty Counsel will be considered an anti-gay hate group in no time.

* It is highly ironic that Barber used Nazi imagery to describe the lgbt community in that conference last year. In a column this week, Barber claimed that the organizations listed as anti-gay hate groups and profiled have already "won the argument" because as he puts it, "It’s often said that the first to call the other a Nazi has lost the argument."

I guess that would make Barber a loser from the offset. But of course we already knew that.

Posted by BlackTsunami at 10:37 AM

Probably because he's a self-loathing closeted gay man, and those are his deepest fantasies....