Brian Brown, head of the National Organization for Marriage, published a Christmas message on the group's blog featuring a picture of him and his family: 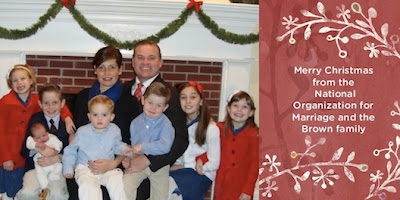 Brown looks like he has a wonderful family and he has every right to be proud of them.

But something is bothering me. What's the difference between his family and these families:

None of these families are any different except for the sexual orientation of the parents. Yet it is this one little thing which propels Brown, NOM, and other members of the religious right to oppose not only same-sex marriage, but also same-sex households.  I could cite many studies which easily demonstrate that there is nothing with same-sex households, but sometimes I just feel like I don't need to.

At what point do we recognize the fact that same-sex families having to always have to "prove" themselves is a basic insult?

The question that those on the right, Brown included, never seem to want to answer is what makes them the arbiters of what constitutes a "good family." What gives them the right to create a caste system for families who doesn't fit their narrow idea of an "idealized situation?"

An "idealized situation" is not reality. It's a fantasy.  Reality is the fact that two-parent heterosexual families are not always the best place to raise children. Reality is that sometimes children thrives in single parents households or even same-sex households.

If Brown and company really cared about families or children, they would do something more about the reality rather than to manipulate the fantasy.

By writing this, I mean no disrespect to Brown and I certainly don't mean any disrespect to his family. But it is patently obscene to me that someone will show pride in his family while attempting to deny others the chance to have the same privilege simply because he does not agree with their sexual orientation.

Posted by BlackTsunami at 3:12 PM