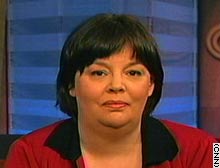 In my last post, I talked about National Organization for Marriage's Maggie Gallagher attempt at covering her tracks in regards to claims of racism she lodged against those angry at Maryland legislator Sam Arora.

Gallagher had initially implied that the anger of the lgbt community over Arora's shift from supporting gay marriage was due to racism. However, this was not the case. Lgbt anger at Arora dealt with his backtracking on gay marriage even after he campaigned for and supported the issue.

In the midst of her efforts to wipe away her initial claim, Gallagher emailed me. I took that opportunity to ask her for a response on another matter regarding NOM's claim that gay marriage was being "taught" to kindergartners in Massachusetts because of that state's law allowing gay marriage.

The Pulitizer-Prize winning site PolitiFact had called NOM out in February after investigating and finding this claim to be false. However, NOM continued to push the claim, even to the point of sending out mailers last week in Maryland saying the following:

This was the initial claim - word for word - which PolitiFact said was false.

Gallagher's response to me was as follows:

But personally I think deciding the two instances Politifacts says were offered (I don't know the details only what PolitiFActs claims happened) were insufficient might justify a finding of "unproven" but hardly shows it is "false."

Moreover in the court cases surrounding these incidents, all the major gay marriage groups argued that in fact parents have no right to prevent their children from being exposed to gay marriage in public schools.

We have never claimed the law will require teaching about gay marriage. We have only said that once it is the law, it will be taught in public schools.

In fact don't you think it ought to be?

Now in all honesty, there should be some fairness to Gallagher there. She is the Chairman of the Board at NOM, and not the operational CEO.

But still her answer to my response leaves a lot to be desired. It does appear to be misleading.

And PolitiFact said the following about this claim:

Bottom line: The National Organization for Marriage mailing says that Massachusetts public schools teach kindergartners about gay marriage. The wording, including the present tense verb, gives the impression this is happening now, in many schools.

But the group’s only evidence is two incidents five years ago. It’s possible that somewhere, in one of the 351 cities and towns in Massachusetts, other kindergartners have been taught about same-sex marriage. But NOM couldn’t cite any other examples. We find its statement False.

And to reach this conclusion, PolitiFact talked to several sources including

To justify this claim, NOM said that this sort of thing is happening right now in Massachusetts because of that state legalizing gay marriage.

But it's not happening. The claim is a lie designed exploit ignorance and scare the hell out of people by conjuring up images of "gay boogeymen" spinning their influence on "impressionable children."

In other words, NOM has brushed off  the old Anita Bryant lie of "gay recruitment" and is placing it on display.

It worked for them in Maine and California. The question is will it work in Maryland?

In reality, children being made aware of same-sex households have nothing to do with any law, but basic common sense. Same-sex households populate probably every state in this country regardless of whether or not lgbt couples can marry. These households do contain children and these children do attend public schools.

By than exploiting these innocent households for political gain, Gallagher and NOM are doing a basic disservice these families and especially the children. Is a child wanting to talk about a family vacation in the wrong simply because that family is from a same-sex household?  Should he or she be shushed by their teacher? Should this child be made to feel that somehow his or her household is inferior?

To paraphrase the words of House Speaker John Boehner:

Again in fairness to NOM,  I will be emailing Brian Brown, NOM's president, on this matter. But shouldn't NOM have sent out a response in February when PolitiFact made the initial charge?


Arora controversy has National Organization for Marriage scrambling for cover

Posted by BlackTsunami at 2:24 PM

As Maggie would say, "I can't help it if the recipients of our flyer misconstrue its meaning. The demonizing of LGBT people wasn't our intent, how could that have happened?"

You're assuming she thinks of families headed by same-sex persons as "families." I don't think she does. If she did accept them as families, she would not be doing what she is doing today.

Shouldn't it be shouting volumes to every day folks that all of the scary stuff these anti-gay industry types "warn" everyone about just doesn't happen? How long have we had marriage equality in MA?

With all their dire predictions - they should have reams of material to back up every one of their talking points.

Now SSM is legally recognized in 10% of the States now, with a much bigger number offering some form of legal recognition. That cat's not going back in the bag and time is on our side as more people realize that NOM, FoF and the other members of the anti-gay industry can't back up their claims.

Put some more of that money aside Maggie, your gravy train is drying up. But hey, they have some great job retraining programs going on these days. Because you're about out of groups to demonize. And you're about out of a generation of people who will support you doing it.

NOM will use an half truth or outright lies in order to stop any gay rights, not just marriage.