It is obvious that in its zeal to stop gay marriage in Maryland, the National Organization for Marriage is going full throttle for the jugular even at the expense of truth.

According to The Washington Blade:

The National Organization for Marriage has launched a series of attack mailers in Maryland, as a House committee gears up for a key vote on a measure to legalize same-sex marriage.

Several mailers target Sen. Jim Brochin, a Baltimore County Democrat and member of the Judicial Proceedings Committee, which approved the bill last month. Brochin initially supported civil unions instead of marriage equality. But he said he changed his position and supported the bill, in part, because of the harsh and intolerant-sounding testimony against the measure by some of its opponents at a public hearing in Annapolis on Feb. 8. NOM’s Maggie Gallagher testified at that hearing.

One of the mailers is as follows: 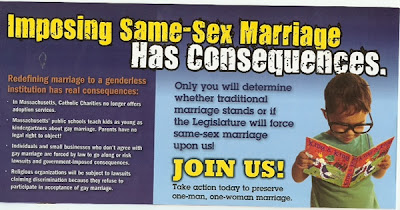 One of the claim on the mailer reads:

However according to the Pulitzer Prize-winning news site PolitiFact, this claim is misleading.

During an investigation of the claim earlier this year, PolitiFact talked to:

PolitiFact's conclusion about NOM's claim of kindergartners being taught gay marriage in Massachusetts is as follows:


Bottom line: The National Organization for Marriage mailing says that Massachusetts public schools teach kindergartners about gay marriage. The wording, including the present tense verb, gives the impression this is happening now, in many schools.

But the group’s only evidence is two incidents five years ago. It’s possible that somewhere, in one of the 351 cities and towns in Massachusetts, other kindergartners have been taught about same-sex marriage. But NOM couldn’t cite any other examples. We find its statement False.

Clearly the NOM is following the same game plan it played in California and Maine, i.e. spooking people by claiming that  "the gays are coming for their children."

If the organization's efforts bear success, expect NOM leaders Maggie Gallagher and Brian Brown to step on the mantle of self-righteousness and falsely claim that they are helping people "stand up for marriage,  when in reality they are getting them to cower in fear at the thought of fictional gay boogeymen.

Yes Maggie Gallagher, you are bigoted and NOM is homophobic. Here's why.

Posted by BlackTsunami at 4:06 PM

I just got the 5 dvd's of testimony from the latest hearings in RI before the House Judiciary Committee.

And the first disc winds up with Maggie Gallagher, Justin Nimocks and the ilk trying out the same old arguments. Ad nauseum.