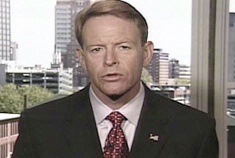 As I have long pointed out, it's not enough to make a few concessions to these extremists. Once they have a foothold, a little bit of acceptance turns into a full-blown demand to co-opt your business. They want corporations to join them in the assault on real tolerance. Unless you cower and give them what they want, these activists will make sure you can't function in society. Over the years, gay activists have perfected this kind of corporate terrorism. And until companies stand their ground and refuse to negotiate, homosexuals will continue to bully businesses.

That was Family Research Council president Tony Perkins yesterday in an email. He was referring to campaign jointly conducted by Media Matters and several national lgbt groups which called on the company Orbitz to stop advertising on Fox News in light of the channel's viciously negative approach to covering lgbt issues.

There is one strange thing about Perkins's statement, however.

It flies in direct opposite to the Family Research Council's actions in several cases, such as when the group supported the boycott against McDonalds because the company gave money to some lgbt organizations:

The Big Mac attack on family values is finally over! After a five-month boycott, Americans finally got what they ordered-McDonald's agreement to stop financing the homosexual agenda. Back in May, the fast food giant joined the Gay and Lesbian Chamber of Commerce to the dismay of millions of customers who did not feel served. At the time, company Vice President Richard Ellis refused to back down, even calling conservatives "haters" in a public statement. The American Family Association launched a national campaign to force McDonald's to eat its words. And eat them, they did!

Or the threatening language it used against the Coca Cola company when it was suspected that the company persuaded the law firm King & Spalding to drop the DOMA case:

Rumors are flying that one of those companies was Coca Cola. People closest to the story are suggesting that the soda king did most of the arm-twisting. "Sources... confirm that one of King & Spalding's top clients, Coca Cola, also based in Atlanta, directly intervened to press the firm to extricate itself from the case." A spokesman for the company refused to comment. But if the allegations are true, I guarantee that FRC won't hesitate to!

I guess being an "economic terrorist"  is all dependent on the spin.

Posted by BlackTsunami at 4:51 AM

So says the spokesbigot of a hate group. Whatever.

I do believe that Tony Perkins, Bryan Fischer of the AFA, and associated ilk are ramping up their vitriol. In other words, these faux Christians are running scared.

They call themselves "Christian", but they make a huge salary, enjoy fame, fortune, and live an upper class lifestyle, and have no tolerance for any other faith, religions, or non believers.

Whited sepulchers was a term reserved for some of them by their dear leader.

Bryan Fischer in particular is a hateful example of the intolerant and vicious theocratic movment.