From my online buddy Jeremy Hooper comes a key to who the National Organization for Marriage is associating with  in its game plan to get gay marriage banned in Minnesota.

On the heels of last night's vote to get gay marriage on the 2012 ballot comes the announcing of a webpage done by NOM in coalition with the Minnesota Family Council:

But when looking at the Minnesota Family Council's webpage, one gets the impression that that organization's stance against gay marriage is less to do with "preserving marriage," but rather adhering to the monstrous stereotypes which lgbts have had to endure for years. 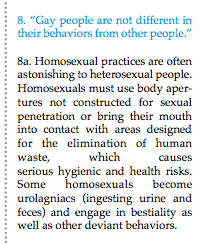 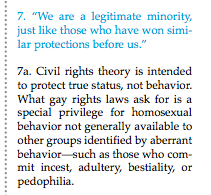 That's right. NOM is partnering with an organization which  pushes discredited Paul Cameronesque lies about the lgbt community. And just so you know, the organization does cite Paul Cameron's group - the Family Research Institute - specifically in the section  of its webpage called Gay Rights:

You will remember, of course, that the Family Research Institute has been called a hate group by the Southern Poverty Law Center for pushing ugly propaganda against the lgbt community.

The irony of the entire thing is that one of the main complaints/talking points of NOM is that it has been unfairly labeled as a bigoted organization for its stance against gay marriage.

The question here is how can NOM continue to voice this complaint/talking point if it does not disavow the anti-gay lies of its coalition partner?

And we all know that NOM will not disavow these lies.

Folks wishing to donate in order to defeat these lies can go here.

Posted by BlackTsunami at 3:30 PM

Get used to it people. The bigots will use ANY and ALL tactics, including the most outrageous outright lies, in order to win this battle.

We have a lot of things going for us in opposition to these bigots. One of the biggest? Practically everything these people come up with is projection. How could they come up with such disgusting imagery and accusations? Because, honestly, these people are either doing these things themselves, or downloading a lot of pictures of that sort off the Internet.

The bigots are cunning and have a lot of monetary resources, but they are also bound by their own disease to be able to project only what they can imagine onto their foes. And what they imagine is what they fantasize on their own time and feel shame about.

These people are sick, twisted bigots, but we can't let that be their advantage. We can't let ourselves be naively surprised that they will sink to such levels. We must anticipate them and be prepared for them and counter them in order to win.