It's been said that when marriage equality passed in the New York Senate, National Organization for Marriage president Brian Brown openly cried with sadness in the galley.

Thanks to Rich Murray, an activist with Queer Rising, we now have proof of this: 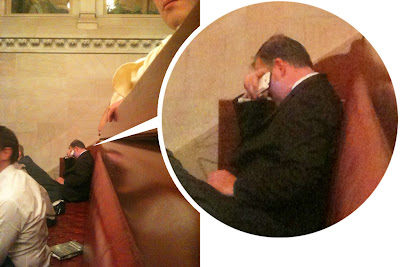 Now some may think that I am simply gloating over this but my reason for posting this picture is a bit more complicated. I have a few questions

Just why in the hell is Brian Brown crying? His marriage isn't affected by what happened in NY. His money situation hasn't been hurt. If anything - based on the ridiculous "we may be down but we aren't licked yet" tone he and the rest who are against marriage equality have taken in a recent New York Times article, one can easily predict some financial raises in Brown's future.

And don't give me that existential, hypothetical crap that "marriage has been redefined for the worse." It's a cute boardroom argument which has absolutely no basis in the real world - and the Prop 8 ruling last year (in which neither Brown nor any of the other "traditional marriage defenders" from NOM bothered to testify) backs me up on that point.

There is no getting around the fact that Brown's weeping - an action comparable to that of a spoiled, petulant child throwing a tantrum because he simply can't get his way -  epitomizes the entire movement against marriage equality so far.

To prove the supposed "dangers" of  marriage equality, (there are no dangers by the way), the opposition  has had to rely on either ridiculous arguments with no basis in concrete fact (same-sex couples will taint the "truthiness" of marriage), lies bordering on vicious group slander (marriage equality is a way to recruit children), or horror stories about religious exemptions (churches will be "forced" to marry gay couples).

How can one weep in sadness over the fact that NY same-sex couples will be able to legally declare their love for one another and protect their families?

In life, there are moments we should weep about with sadness. Your fellow American gaining a measure of equality is NOT one of those moments.

Posted by BlackTsunami at 2:55 PM

I don't normally comment on your blog, I read it via Google Reader. But the question you pose and the answers you hypothesize... I wanted to throw this out there for you to think about...

NOM goes to great lengths to hide its funding sources, but speculation is rampant that the money coming from the Catholic Church. Certainly we know the KoC give NOM a lot of money. If NOM really is some sort of front organization for the Church, well, we're talking about a pretty powerful entity here, and Brian Brown just failed his sponsors spectacularly.

You'd cry too if you were in that position.

Yeah, if the man is crying for anything, he's crying because his nearly half million a year salary is in jeopardy. Yes, he's bound to recognize that eventually, SSM will be the law of the land. Oh, NOM will win a few more battles, but the war is effectively lost now. Time is on our side.

Unlike Brian Brown (maybe), some of the members of the various chapters of the KoC funding NOM will be able to cry in their beers and other cocktails which they will be drinking at the nearest gay bar with many other male "professional" Catholics. And after a few nights of fun and frivolity they'll probably at least temporarily forget that Brian Brown has "failed" them. BTW, I am a former catholic monk. So I'm not just making this stuff up...

How come NOM didn't testify in the Prop8 hearings?

Oh, wait. That's right. It's against the law to lie in court.

What a great article. Thanks for writing it!

What a sad life these people lead.

While they spend every waking moment inventing new lies to tell the uneducated wastes of life to raise money, I'll be jumping out of airplanes, loving on my racehorses and going home to my life-long partner for a meal and some good old-fashioned cuddling - every single day for the rest of my life.

Ten years ago I hated them. Now I only have pity for them.

1) It's human to cry when you lose. Over anything. The competition is ALL, to lose it is to lose EVERYTHING.

2) He genuinely believes his argument (i.e., he's convinced himself of his own lies). It's another very human thing to do.

I'm not trying to show compassion for Brown (far from it!). But understanding him may help the cause for marriage equality.

You may not be gloating, but I sure am. Crocodile tears, this just makes his "mission" more vital, sned in those dollars!

The difference between "us and them" is that our side does try to maintain intellectual honesty and we really don't have to work very hard at it when it's so easy to discredit their lies and misrepresentations.
But Alvin, "There is no getting around the fact Brown is weeping-..." Really?
Objectively, yes, this a snap of a man who COULD be crying. Or, perhaps he's obviously exasperated with the outcome and this is just an "Oh, crap!" moment, sans tears. Or maybe it's simply a mental "face palm" because the idiot on his iPhone just told him the "Traditional Marriage NY Victory" party was all set up and ready. You get my drift?
Indeed, show me video of his shoulders heaving, his right hand continuing, from its position in the snap, across his eyes coming away shiny from his tears.
But to assume at face value that he's actually crying from just that one snap because it might evoke pity, schadenfreund, a sense of revenge or even of justice I think, is, in fact, a bit of gloating from that presumption.
But... What's wrong with a little (deserved?) gloating?

I wish nothing but the worst for Mr. Brown. He is a hateful liar and a waste of DNA.

well this is a very wonderful victory for us in NY we have to remain modest. for if we gloat we're just reinforce the lie and stereotypes. this is why MLK Jr. chose this method, so instead of spreading hate and discontent among those who disagreed with his views he helped others understand. here's a quote by Gandhi to stool over: if one cannot change how can we expect others to change; or something like that
idk but thats the gist of it