DADT repeal - celebrate now but remember the enemies at the gate

Today's repeal of DADT is a day which many gays and lesbians have been fighting for and waiting to see for a long time.

And of course, there will be a lot of celebrations.

With that in mind, pardon me for being the "one who lapped up the water like a dog " (it's a Biblical reference from the book of Gideon) by checking out what folks on the other side of the DADT repeal feel about this historic day.

First up is Elaine Donnelly of the Center for Military Readiness. Donnelly has fought tooth and nail over the years against not only the repeal but also against the concept of gays and lesbians serving in the military, period.

The irony being, of course, the simple fact that in spite of the official sounding name of her group and how she is looked at as an "expert" by some, Donnelly has absolutely no military experience.

Naturally, she isn't happy about losing her gig:

The CMR leader predicts litigators for homosexual activists and the homosexual movement are going to have a field day. "Without the law on the books, they will go into court and challenge anything that stands in the way of what they perceive as a civil rights issue," she warns.

Of course Donnelly's comments are nothing compared to the comments from the conservative wolf's glenn, Free Republic. Those folks abandoned rationality for venom a long time ago. However, the repeal of DADT seems to have especially brought out the hate. Don't read the following without a crucifix or holy water handy:

No doubt. Just wait for the next draft. They´ll be ¨touched¨ then too.
For the first time since the beginning of the last century, no member of my immediate family is a member of the US Armed Forces. The liberals wanted it, and they’ve got it. Now they can go fight, or find someone to do it for them. We’re sitting the next war out.
In the enlisted ranks almost no straight soldier will ever allow a known gay to place their hands on him in the normal ways this occurs when soldiers horse around. Almost no gay soldier will ever be seen in a group of soldiers out boozing it up because once they get a few in them most of these guys will say what’s on their minds and their will be trouble. No gay will be permitted in the shower when a straight soldier is in there and no straight soldier will enter a shower while there is a gay in there. Gays will be told when they can shower and they will listen. If they choose to complain of their treatment they will have no witnesses and their complaint will get them nowhere but a session we used to refer to as “midnight counseling”, which will quickly cure them of the bad habit of running to the brass.
Seriously, I really hope that a “Gay Mafia” of senior officers doesn’t end up being established. But, I fear that this will end up being the case (in 10-15 years) to make up for past discrimination. If so, it will be the beginning of the end for the military as patriotic, straight soldiers will be forced out (or court martialed) out. Once you have a situation where gays can flaunt it and straights are prosecuted for objecting, you will lose the backbone of the military very quickly. What is left won’t be worth dog spit. It may take a major military loss to change things back, but I doubt it. They will probably place blame everywhere but when it really belongs. This country seems to be slowly losing the ability to learn the right lessons from its mistakes.
With General Barney Frank bringing up the rear.
The people that produce TV and movies think that homosexual behavior is normal, so why would they even consider put a warning label on it? The thought would be as alien to them as Algebra would be to the head-hunters of Borneo. By their way of thinking, they would be more inclined to have a warning saying, "This program contains a graphic depiction of religiously-observant Americans practicing their backward beliefs. This program may be too disturbing to progressive individuals." That's how warped they are and how upside-down everything has become in our culture.

If the Catholic church organization is any guide, gays will consolidate in certain bases or commands, attempt to "convert" the straights they can, and drive out those they can't. As gays infiltrate the command structure, we will see whole bases, wings, or ships/subs become "pink," with cover-ups orchestrated from above.The potential for trouble is virtually unlimited. For example, think of the consequences for international relations and the reputation of the United States military when some of the "pink" units are sent overseas to perform "humanitarian" or "nation building" missions.

And one "enterprising" individual took the time to make the following graphic: 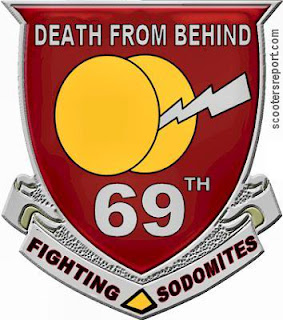 So why am I dwelling on the so-called "negative" during this great day, you ask. Allow a comment from Donnelly to give you an indication:

Donnelly says the "deceptive tactics" employed to pass and enforce the LGBT law should be made public -- and that the next president and Congress "should resolve to take our military back."

Through enormous effort, the gay community and our allies got DADT repealed. But that's merely a first step. Attaining a goal is one thing. Holding on to what you have is another step entirely.

We are up against opposition who refuse to reason or deal in reality or rationality. The repeal is in place, but what's to stop those like Donnelly from attempting to bring DADT back. What's to stop them from siddling  to the prospective Republican presidential candidates and exacting a promise - or a pledge (they seem to love signing those) - that one of them will bring back DADT if elected to office?

The gay community and our allies worked hard for this day. We have every right to celebrate the victory and to bask in the glow.

Bu we also need to remember that it's not over yet. Don't forget the enemies at the gate just waiting for us to slack up.

Posted by BlackTsunami at 4:59 AM

Hey Alvin! You know, I am shocked that NOM was not more vociferous about ceasing the DADT repeal because they have been affirming for a very long time that they want not only the Fed. Gov't, but individual citizens to have the alleged "right" to discriminate against us based on religious or moral grounds in terms of EMPLOYMENT, HOUSING, or goods and services, etc. Hell, even Maggie has insisted in a Yale debate that it is impossible to discriminate against us because we do not meet whatever Maggie and her acolyte's definition of "discrimination". Yet, surprisingly, in light of NOM's previously outlined positions, they tweeted (if I recall correctly) that we have the right to work where we like without fear of being fired for being Gay. They deleted this comment, however, when they were called out against not being anti-Gay enough by a hate-group.

Alvin, a question has occurred to me which has, hitherto, gone uncovered by the local media, as well as every Activist that I am aware of, which is principally an investigation into those service members who willingly outed a GLBT service member to the brass, knowing what the consequences would be. Why did they do this, even knowing they would be ruining their "best friend" in the military? What was their impetus? Was it religious? Where is Maggie, I wonder, defending this purview now? Surely the IDs of these men and women is in the military record so we can hunt them down and ask them!

Certainly, their religious devotion and possible bigotry must be questioned in like of their actions--treasonous actions, IMHO--since they got men and women fired during wartime, making us not only vulnerable, but it cost this country several millions of dollars per years!