Today was the deadline for signatures to qualify a new referendum for inclusion on the November 2012 ballot.

As EQCA announced yesterday, the anti-equality advocates were unable to get the specified number of signatures to get their discriminatory policies back in the hands of the voters.

They were seeking a referendum to overturn the recent FAIR Education Act (SB48), which ensures classrooms are including LGBT, minority and handicapped individuals in the teaching of history.

At many public locations where the group attempted to gather signatures, it was reported they were misleading the public about what the law was about, even linking it in some cases to pedophilia.

After a last minute rally in an attempt to uncover or gather more signatures, today the group sent out an email to all their supporters, entitled, "We Fought the Law and the Law Won."

In the email, they shared their disappointment with losing their attempt at overturning the "very bad law" and thanked their supporters.

They also offered guidance on what to expect of their referndum's "opponents," avowed to not give up the fight for the sake of the children and identified the state politicians that stood with them in the attempt to overturn the FAIR Education Act.

The communication also gives insight into to their discriminatory tactics, from the school board level, up.

Unfortunately we did not collect enough signatures to qualify the referendum to overturn SB48. That law will be in place in our schools at the first of next year.

We thank all of you that worked so hard to provide the hundreds of thousands of signatures received. In the end, 90 days was too short a time to accomplish such a large task.

In the coming days you will see the celebration of our opponents. We know this because it has already started in social media and other places. And some of the rhetoric will be harsh. Remember, despite what they say about us, we opposed SB 48 simply because we do not believe that children should be exposed to an intentionally one-sided argument about lifestyles and values we do not hold.

And you will have to face some of those who said from the beginning that our referendum effort was a waste of time. They said we did not have enough money, the commitment of enough groups, or enough days. Ultimately they were right. And in private perhaps they will ask if the effort they withheld would have made the critical difference.

In the end, everybody that dedicated time and effort to qualifying this referendum should hold their heads high. The children in California schools and their parents owe a debt of gratitude to each of you for attempting such a huge task.

We hope that you will be there for the next battle.

While we did not overturn this very bad law, we built a small army of dedicated volunteers that collected an incredible amount of signatures. There will be a next battle. Despite the overuse of the term "tolerance," there is little tolerance for those who do not endorse the lesbian, gay, bisexual and transgender lifestyles. And there will be more laws passed that advocate for these and attempt to silence any opposition.

What tripe. They pass themselves off as so noble. Of course they omit the depths they stooped to in trying to get signatures for the petition such as telling basic lies about what the petition was about and then trying to push the following mess in area churches: 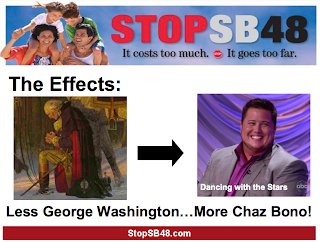 I didn't post this yesterday in spite of the fact that several pro-gay blogs did simply because I wanted concrete confirmation. Having dealt with religious right tactics, I was very wary of a Trojan Horse tactic. But there is no need to be wary any more.

These folks and all of their lies about "indoctrinating children" lost and lost hard. And that includes the Family Research Council and the National Organization for Marriage.

Let this be a lesson to us all. There are times when all of the money, influence, and connections in the world can't make lies true. And if those of us who are fighting these lies hold fast to our principles and never stop fighting, we win.

For true information about the Fair Education Act, go here.

Posted by BlackTsunami at 3:23 PM

may this be the first of many losses for NOM and their fellow hate groups, the sooner they become obsolete, the better this world will be

Wow, this is so awesome. I think my favorite part is where it says "we opposed SB 48 simply because we do not believe that children should be exposed to an intentionally one-sided argument about lifestyles and values we do not hold." That was particularly impressive. Especially considering that SB48 is specifically designed to give a full-bodied view of our current and historical culture. The fact that they will be teaching about what LGBT, minority and handicapped individuals (but let's face it, they're _really_ concerned with the LGBT part of that sentence)have accomplished as great thinkers, inventors or rights workers does not, by necessity include 'an argument' about whether it is right or wrong, natural, or acceptable to be LGBT. Frankly I think they're just upset that they have to acknowledge our existence at all. I love how they totally ignore that we've been here (I'm just speculating, here) since before the "Good Book" was even written. Guess what people... you're not going to get rid of us. We're here to stay.

Seriously why oh WHY do the homophobes have to push lies like "less George Washington more Chaz Bono"? Because they KNOW they can't make an honest justification for their prejudice so they appeal to sheep with these scare tactics. BTW, I learned about this first from the San Francisco Chronicle, their article is Group fighting LGBT teachings fails petition drive.

It still rhymes and emphasizes the toxic nature of their hate.