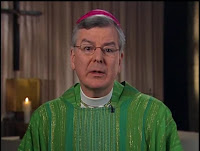 Through the powerful intercession of the Holy Family, grant to this local Church the many graces we need to foster, strengthen, and support faith-filled, holy marriages and holy families.

May the vocation of married life, a true calling to share in your own divine and creative life, be recognized by all believers as a source of blessing and joy, and a revelation of your own divine goodness.

Grant to us all the gift of courage to proclaim and defend your plan for marriage, which is the union of one man and one woman in a lifelong, exclusive relationship of loving trust, compassion, and generosity, open to the conception of children.

We make our prayer through Jesus Christ, who is Lord forever and ever. Amen.

It is worth noting that Minnesota is in the middle of a ballot campaign over marriage equality and this move by Nienstedt is the latest in what seems to be a crusade of the Minnesota Catholic bishops to interject themselves into a political battle.

According to the group Truth Wins Out:

This isn’t the first time that Minnesota’s Catholic bishops have specifically encouraged their priests and congregants to use parish time, facilities, and resources to push for the passage of the state’s proposed ban on same-sex marriage. In September 2010, the bishops produced and mailed a DVD attacking marriage equality to all registered Catholic households. And in another letter this fall, Nienstedt directed parish priests to form committees in their churches devoted “…to educat[ing] the faithful about the church’s teachings on [marriage], and to vigorously organiz[ing] and support[ing] a grass-roots effort to get out the vote to support the passage of this amendment.” The Archbishop called it “imperative that we marshal our resources” in this fight.

What can be seen as bothersome about this is that Nienstedt is specifically pushing this prayer as a political maneuver rather than one of spiritual faith. He clearly states the following:

To help assist in the strengthening of our state-wide efforts to defend marriage in our civil constitution, I am pleased to offer to your community of faith the enclosed prayer. Copies may be ordered through the Office of Worship, and are meant for use within the Holy Mass as part of the Prayer of the Faithful. In addition, I would encourage the posting of the prayer within Eucharistic Adoration chapels, along with an encouragement to adorers to pray for the success of the amendment and all efforts to strengthen marriage.

Regardless of what one feels about marriage equality or the Catholic faith, the interjection of a prayer designed to politically motivate people rather than speak to their hearts has be troubling.

Truth Wins Out says the following:

There is absolutely no defense on any level for this kind of malicious, disgusting hatred. Nienstedt’s text is anything but a “prayer,” but instead is an overt attempt to cloak a set of anti-gay political talking points with the mantle of faith. The Archbishop even stoops so low as to use the Eucharist, which is sacred to LGBT and non-LGBT Catholics alike, as a weapon in the fight to exclude loving same-sex couples from marriage in Minnesota.

Catholic Church making deal with the devil to stop marriage equality in Minnesota?


Catholic Church is overstepping its bounds against marriage equality in Minnesota

Posted by BlackTsunami at 9:08 AM

It is time for the church to give up its nonprofit status.

This is nothing new at all. The Catholic Church has been using the pulpit and the churc to push their political issues for decades. I don't agree with it all, but it's not news that they do it.

Someone needs to crack down on the Catholic church for this... IRS, are you paying attention?! (I rather doubt it...)

What they're doing is legally allowable (non-profits can engage in issue advocacy as long as they don't devote most of their budgets to it; they cannot endorse particular candidates or parties, since that would give them an unfair fundraising advantage).

Ethically, however, I'm reminded of a comment made by one, IIRC, very conservative Southern Baptist: "when you mix religion with politics, what you wind up with is just politics."