It would appear - and this is speculation on my part - that the National Organization for Marriage is trying to pull a public relations trick under all of our eyes.

First we learned about NOM's tax return from 2010. On Dec. 12, The Washington Independent published an article pointing out, amongst other things, that:

. . . just two individuals contributed more than $6 million to the organization’s political arm – accounting for about two-thirds of NOM’s 2010 revenue, while single donations below $5,000 covered only 8 percent of reported revenue.

Then on Dec 13, NOM sent out this supposed plea for money:

Increasingly virulent and frequent attacks from the same-sex marriage lobby have depleted our emergency funds, and we need your help!

As 2011 draws to a close, everyone at the National Organization for Marriage is excited about the election year ahead, which we believe will be full of huge victories for traditional marriage.

But unless we raise additional funds quickly, we will be faced with hard decisions about where to begin scaling back our efforts for next year. NOM does not have the resources to accomplish everything we need to do...and with the many new and critical marriage battles upcoming in 2012, this is the exact wrong time for us to have to scale back.

One of our most generous donors has offered to MATCH—dollar for dollar—every single gift we receive between now and New Year's Day, all the way up to one million dollars!

On the heels of that post comes this announcement  - on Dec. 22 - of the alleged success of that campaign. NOM is well on the road to raise $1 million in an amazingly short amount of time: 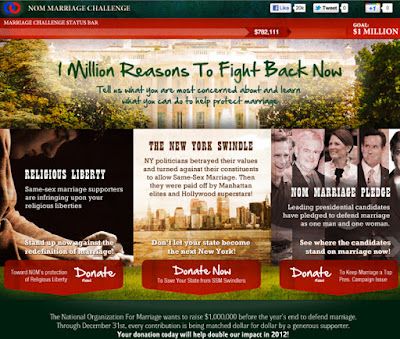 I might point out that  the comments section of the Dec. 20 post announcing the campaign is empty. No "you all do important work so I am going to send in this amount" or "I'm not sending any of you a penny."  No one was voicing an opinion either way.

Also, the Dec. 20 post was neither favorited nor was it twittered out. If NOM's request for funds went viral, you certainly couldn't tell.

Small guess what the next announcement coming from NOM's president Brian Brown will be - something huge and elaborate trumpeting about how "so many people felt that NOM's work was important that they dug deep in their pockets to help the organization."

Bottom line - When I read about NOM's initial plea for money a while back, I smelled a rat. And it's the same stink I smell when it comes to this campaign.

How much does anyone want to bet that NOM had that million all of the time (probably due to that small cartel of big time donors) and is trying to pass it off as a spontaneous donation from its so-called "numerous followers" who appreciate NOM's work.

Based upon NOM's past attempts to pull the wool over people's eyes, nothing would surprise me.

Posted by BlackTsunami at 1:10 PM

Watch, Brian will make a Christmas day announcement that they reached their goal and something about how he normally would never interrupt family time on Christmas day but he just had to share the wonderful news of this Christmas miracle. It's all a bunch of lies. He's such a despicable man.

I certainly wouldn't put it past him.