It saddens me to report that a group of black pastors have learned nothing from Martin Luther King Jr's message of love.

How else can one explain what a group of them are doing today?

Today, these pastors are teaming up with resident homophobes Peter LaBarbera, Linda Harvey, Matt Barber, and others  to hold a press conference at noon outside the headquarters of the Southern Poverty Law Center to  protest the fact that several religious right groups, including LaBarbera's Americans for Truth, were named by SPLC as hate groups.

the SPLC’s listings of these groups is based on their propagation of known falsehoods — claims about LGBT people that have been thoroughly discredited by scientific authorities — and repeated, groundless name-calling. Viewing homosexuality as unbiblical does not qualify organizations for listing as hate groups.

But of course LaBarbera and company will push the false idea that these groups are being attacked because of their supposed Christian beliefs. This is what he had to say about the press conference:

Peter LaBarbera, president of Americans For Truth, which is sponsoring the press event, recently interviewed Pastor Wooden, who said that the SPLC’s gambit of labeling mainstream pro-family groups that oppose homosexual activism as “hate groups” is seriously damaging the SPLC’s credibility. Wooden also debunked the “civil rights” analogy used by “gay” activists, saying it is wrong to compare “my beautiful blackness” with homosexual perversion.

LaBarbera said the SPLC is engaged in a thinly-veiled, one-sided campaign to demonize adherents of traditional Judeo-Christian morality.

How sad. LaBarbera gets a bunch of black pastors who are desperate for publicity to accompany him.  I don't recognize these black pastors, except for one - Dr. Patrick Wooden, pastor, Upper Room Church of God in Christ (COGIC), Raleigh, NC.

This is the same Wooden who said the following in 2004:


"We have to block the use of euphemisms when we talk about homosexuals. They are not gay. We've got to use terms like 'deviant' and 'abomination.' "

Maybe these pastors are so desperate for publicity that they are not aware of who they are teaming up with, so allow me to give a short overview of their "friends:"

Matt Barber of the Liberty Counsel  who defends countries that persecute lgbts, compares lgbts and progressives in general to idol worshippers and child sacrificers of Biblical times, and made the following ugly comment about gays being allowed to serve openly in the military:

And above all, let's not forget the following comment he made about same-sex relationships:

Linda Harvey of Mission America who, according to Right Wing Watch:

believes that gay people use “demonic manipulation” to recruit children and told parents to “separate your child” from their gay friends, maintains that same-sex couples create a “sin-based family” that is “constructed around sexual deviance.” By affirming and promoting sin, Harvey says that “other sins are more likely to scurry in through the cracks,” like “substance abuse” and “poor decisions about finances.” She claims that the mortgage crisis has its roots in tolerance of homosexuality since “sexual and material covetousness are usually sin siblings,” and alleges that the acceptance of gay and lesbian families leads to social ills like “infidelity, divorce, gambling or porn addictions, job instability, credit card default, domestic abuse, sexual deviance, and criminality,” along with more children born out of wedlock and declining church attendance

Harvey also believes that parents should keep their children away from gay and lesbian doctors. This is confusing because another time, Harvey said that gays don't exist.


Rabbi Yehuda Levin, Rabbinical Alliance of America who in 2010 called the repeal of Don't Ask, Don't Tell the "equivalent of the spiritual rape of our military." He further claimed that the country would lose wars because of it. Levin also called gays "moral terrorists," blamed LGBT people for things like the Haitian earthquake and 9/11, and compared gays to pedophiles.

Arthur Goldberg who, according to the site Truth Wins Out, was sentenced to 18 months in jail for bilking poor communities with complicated bond schemes and served six months in prison. He now runs a fraudulent ex-gay group, JONAH (Jews Offering New Alternatives to Homosexuality) which, when not pushing cherry-picked science,  contains unlicensed therapists who force prospective patients to allegedly strip and touch their genitals. Goldberg is on record defending the practice of asking patients to strip but says no one was asked to touch their genitals.

Brian Camenker, head of the hate group Mass Resistance. Amongst other things,  Camenker has manufactured a phony panic about "schools teaching children about homosexuality," made a claim in 2006 that "gays were trying to get legislation passed to allow sex with animals" in Massachusetts, and continued a vindictive campaign of misinformation against the transgendered community (whom the organization refers to as "men in dresses) . Camenker's group was also spread lies about Obama appointee Kevin Jennings such as he was teaching children "deviant sexual behavior," and that he was giving children sexually explicit books. Both claims were refuted as lies.

And last but not least, Peter LaBarbera himself who has become a walking billboard for homophobia. All of the things LaBarbera has done to smear the gay community can fill a several volumes of an encyclopedia, but for my money, these are the worst:

Defended a bill which would lead to the imprisonment and possible genocide of Ugandans simply for being gay or lesbian.

Going to subcultural leather events and using the "racy" behavior of gays attending to stigmatize the entire lgbt community while ignoring the behavior of heterosexuals at the same events.

Freely admitting to errors when it comes to claims against the gay and lesbian community but not taking responsibility for them.

Continuously citing the work of the discredited researcher Paul Cameron, even when made aware of his dubious history of getting kicked out of medical groups, censures and rebukes.

Then there is this nasty picture he doctored up of openly gay Congressman Barney Frank: 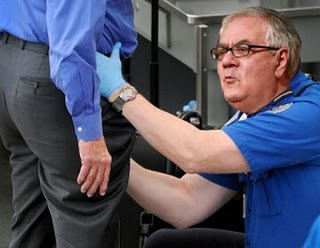 The sad irony of what black these pastors are doing will elude them. No doubt we will hear during the press conference about how you "can't compare homosexuality to being black" and how "the gay rights movement is an aberration of the civil rights movement."

As for me, I'm tired of the argument. I have finally come to the conclusion that no one group owns the civil rights movement. As along as people - any people - are subjected to hatred, discrimination, and dehumanization, these people are going to cry out in protest, as they should.

It's all about respect. It's about being treated like a basic human who is able live your life by your own expectations and not shackled down by the ignorance of others.

But here is the thing I don't understand and I need these black pastors to explain to me. How can they hold the legacy of standing up to those who would demean them for being black while at the same time standing with those who demean the gay community.

The hatred is no different.

The lies are no different.

The dehumanization is no different.

That's the real sad thing of this entire incident. We often make the mistake of thinking that those who have been victims of discrimination would have empathy for other victims. This generally isn't true. As long as there is  publicity to be had, and money to be made, empathy goes right out of the window and in its place comes a disturbing degree of tone deafness.

The presence of these black pastors at this mockery, i.e. press conference is a slap in the face to not only the Christian love they profess to hold but also to the legacy of Dr. King.

And I hope they enjoy looking into the television cameras which may come from their publicity stunt because if they were true people of God, they shouldn't be able to look at themselves in the mirror.

Posted by BlackTsunami at 4:51 AM

DL Foster will be there too. Why am I not surprised?