The more Maggie Gallagher of the National Organization for Marriage tries to explain away the organization's race-baiting scandal, the deeper she digs the hole.

She registered comments on an National Review blog post she authored (the same blog post in which she asserted that the controversy was the subject of a slow news day) but her insensitive answer left a lot more questions: 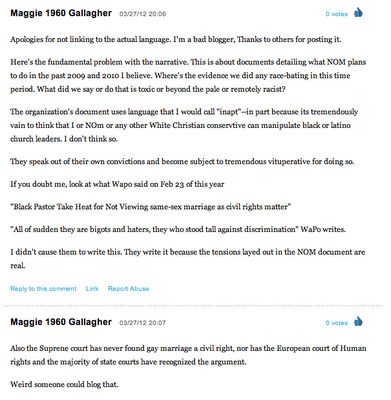 So Gallagher is saying "The controversy is nothing because the documents outlined detailed what NOM was going to do in 2009 and 2010. Where is the evidence that we actually did those things during that time?"

It's a flippant answer and extremely evasive. Particularly because nothing in the document said that NOM would cease this plan of playing the black and gay community against each other.

And particularly because Gallagher omitted what NOM did in 2011 to drive a wedge between the black and gay communities.

Equality Matters lays out at least five of these acts, including implying that white gay men are taking black babies from their families and producing and releasing a video titled “Will the Black Church Rise Up in New York For Marriage?”

Gallagher has a history of giving flippant and evasive answers when caught in wrongdoing.

In 2002 and 2003 when she was a syndicated columnist, she received over $20,000 from the Bush Administration to push its Healthy Marriage Initiative. During that time, she wrote columns in favor of this policy and also testified in front of Congress for it.

And she never at the time revealed the payment she had received. When confronted with this information, Gallagher said:

"Did I violate journalistic ethics by not disclosing it? I don't know. You tell me. ...frankly, it never occurred to me."

"I should have disclosed a government contract when I later wrote about the Bush marriage initiative. I would have, if I had remembered it. My apologies to my readers."

In that controversy and in this one, Gallagher seems be trying to turn the tables by asserting herself as a calm grandmother talking to children raising much ado about nothing.

It's an insulting thing to assert and its even more insulting that Gallagher thinks that she can get away with it.

Hat tip to Jeremy Hooper for the copy of Gallagher's comments.

Editor's note - yesterday, it was reported that Gallagher was avoiding an interview on MSNBC about the controversy. However this is inaccurate. MSNBC directed her to the wrong studio.

Posted by BlackTsunami at 4:55 AM

"What did we say or do that is toxic or beyond the pale or remotely racist?"


... So, does she want an itemized list, or will she be okay with just the summary?

"Here's the fundamental problem with the narrative. This is about documents detail what NOM plans to do in the past . . . Where's the evidence we did any race-baiting in this time period."

Perhaps the e-mails released by Louis Marinelli - e-mails that YOU sent, Magsy ol' chum - stating that you were intentionally searching photos of rallies to show a predominance of black people calmly facing off again "angry" equality activists?

But beyond that, who cares if there's any evidence? The fact that you were even thinking of it as a viable option to forward your goals indicates VERY clearly that, in no way, shape, or form are you interested in a fair an open debate and narrative on the issue! You ignorant, pitiable woman, can you not even grasp that beyond the wall of your own secure self-delusions? Do you not understand that the fact that anyone at NOM would even voice this as a plan completely and irrevocably damns your organization and utterly justifies the SPLC's label toward you as a hate group?

To very slightly paraphrase Robert Browning, I think that the first stanza of his "Childe Roland to the Dark Tower Came" very well-fits Maggie's attitude and life goals: "My first thought was, [s]he lied in every word / That hoary cripple, with malicious eye / Askance to watch the working of [her] lie / On mine, and mouth scarce able to afford / Suppression of the glee, that pursed and scored / Its edge, at one more victim gained thereby."

As a academician, I am not generally one to lob ad hominen attacks. Having said that, this woman appears to be mentally deficient. When I see her, hear her, or read her, the only phrase that comes to mind is the good ol' Southern backhanded comment, "Bless her heart." However, given that she appears to be lacking that particular organ (along with a brain, and yes, courage) perhaps we could begin referring to her as "Ozzy". It truly seems to fit her.

"And she never at the time revealed the payment she had received. When confronted with this information, Gallagher said:

"Did I violate journalistic ethics by not disclosing it? I don't know. You tell me. ...frankly, it never occurred to me."

"I should have disclosed a government contract when I later wrote about the Bush marriage initiative. I would have, if I had remembered it. My apologies to my readers."

The key word here is ethics- she has none. As for her memory lapse, I'll quote SNL's Church Lady and say "How convenient!"