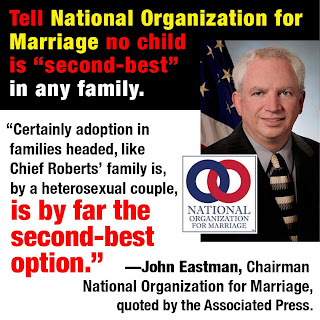 By now, many of you reading this post have heard of the comments uttered by National Organization for Marriage chairman John Eastman regarding Justice John Roberts' adopted children and adoption in general. And no doubt there will be some claiming that we are making too much of Eastman's statement or that it was a simple gaffe which takes needed attention away from the important subject of marriage equality

But attention over Eastman's words are not a phony moral panic and to label his comment as a simple "gaffe" is trivializing its harm.

What Eastman did was to push a concept into the idea of family which has no business being there. Families should never be judged on a tier. They aren't baked goods at the state fair to be given ribbons marking 1st, 2nd, and 3rd place.

Nor should it be implied that families exist in a caste system where the designated "gold standard" grabs all of the attention while other families who are not that "standard" are either hardly mentioned or downgraded.

When it comes to families, there is no such thing as a "second-best option," except unfortunately in the head of Eastman and his organization which - I may point out - has never offered any new ideas of placing orphaned or foster children into any family households at all, including the two-parent heterosexual household it holds so dear.

Nor has NOM ever offered any solutions to the real problems facing families of all stripe such as poverty, unemployment, lack of decent health and education options, or lack of good housing.

Eastman and NOM are like charlatans from days of old who would roll into town after town masquerading as physicians while hawking a useless cure-all with flowery rhetoric and flashy bottles.

In this case, the cure-all seems to be keeping members from the gay community from getting married and keeping same-sex families in the background. And like those charlatans, Eastman and NOM talk a good game, but when you get past the rhetoric and the flash you realize that the cure-all cures nothing.

Keeping gays and lesbians from getting married and keeping same-sex families in the background has never improved the quality of life of any household. It has never saved a family's mortgage nor gotten a family's children into a decent college.

Keeping gays and lesbians from getting married and keeping same-sex families in the background has never paid overdue utility notices, rent, or medical bills.

What this rhetoric does is pits us against one another by fooling us into thinking that the love and support each family is capable of giving should be judged not by how much good it does but who is the giver.

The rhetoric places status above love, support, and the willingness to sacrifice - three qualities which all good families have in abundance.

Eastman and NOM's rhetoric is a game, i.e. a vulgar exercise in passive-aggressive homophobia which cushions some from accepting the simple fact that maybe their disagreement  with marriage equality has less to do with saving the family and more to do with their inability to deal with innate inaccuracies about the gay community and same-sex families.

And unfortunately, as Eastman's comments demonstrate, other families are becoming collateral damage in this passive-aggressive game.
Posted by BlackTsunami at 3:18 PM