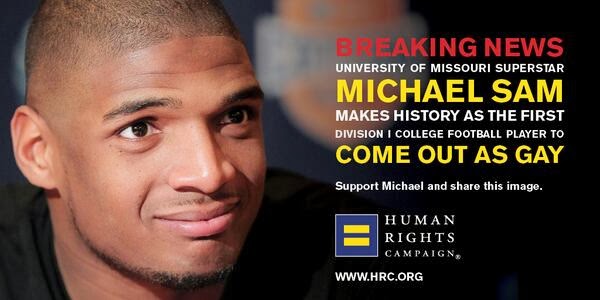 Earlier today, I read (and subsequently posted a link to) a Huffington Post article about the 18 worst reactions to the coming out of Missouri College football player Michael Sam.

I posted a comment in answer to someone who took it upon themselves to use the situation to play armchair psychologist and proclaim the African-American community intrinsically homophobic. My response got some people not exactly happy at me. I rolled eyes when reading their responses while thinking "here we go again."

I hardly talk about how some lgbts take situations like Sam's coming out and combine anecdotal evidence (in this case the number of ugly tweets coming from African-Americans) to suddenly declare black people to be the standard of community homophobia. I find these individuals' lack of common sense to be annoying and their immediate reaction to be indicative of how unfortunately some in the lgbt community are always so ready to react rather than think things through. And you know how it is when some of us lgbts get into that mode of "righteous indignation." Even Jesus can't calm us down.

One would think that folks would refrain from making rash generalizations in lieu of the aftermath of the 2008 Prop 8 vote in California. Back then, the false story that black folks led the way in passing that awful law led to an awful community clash and by the time the truth came out, both communities were nursing hurt feelings coming from the exchange of ugly words. And why shouldn't they?  Being called a "ni - - -ger" by an lgbt hurts as equally as being called a "fa---ot" by an African-American

The semantic argument of "oppose discrimination when it happens to gays because you remember how bad it was when it happened to you" was insulting, particularly when the argument was made instead of pointing out how lgbt couples of color with children would benefit from marriage equality or how bullying affects lgbt children of color, particularly transgender children of color.

This was a problem in many ways, particularly the fact that it was duly noted by African-Americans who were on the fence about these issues.

In all honesty, lgbt community has gotten better in engaging the black community since then but there are still problem which engaging just won't solve. In both the black and lgbt communities, there is an unconscious mindset which tells lgbts of color like myself that we have to sacrifice part of our identities. In other words,  neither community seem to know how lgbts of color fit into the current diaspora of either being gay or being black in America.  What's more galling is how both groups choose to address lgbts of color, i.e. by pointing out past achievements. Yes we know that Bayard Rustin was the openly gay black man who organized the 1963 March on Washington and yes we know that black  drag queens and lesbians led the way at Stonewall but lgbts of color like myself don't want validation by past events. We want to see who is doing what now. We want to see ourselves in issues of relevancy in today's environment and discussions regarding equality. And we want to see those who resemble us in both racial make-up and sexual orientation have a larger voice in both communities when it comes to these issues.

We don't get that from either community. All we seem to get sometimes is the idea that we are not human beings, but merely commodities to be used further either the struggle for racial equality or lgbt equality. The sad thing is that we can do a lot to further both if just given the chance instead of the generalized brush-off.

With us, there is no "either/or."
Posted by BlackTsunami at 3:19 PM

I always point out that the NAACP were the first group unrelated to the LGBT community to say gay rights are civil rights.

I'm sorry, I have a bad habit of posting before the article is done. Its in my nature to be just a little snarky, and it would have been wiser to wait until the article is done before posting. In regards to the NAACP it is my response to people who say blacks are homophobic. There are no alls and nones in any community. I have my thery on why things are bad where they are, but I don't think they'd help much here.

As for looking at how present day people treat black gays or their place, I remember a family that spoke out for their transgender daughter after she was killed. I think the problem is we don't give people the chance to speak out as well as we should.

WTF, people. Have y'all forgotten that groups like NOM explicitly want to drive a wedge between black people and GSM people as a way to keep us both down? Why are you helping NOM with their anti gay agenda?

NOM is able to create that wedge in part of people making generalizations when it comes to African-Americans and homophobia and when people refuse to acknowledge the existence of lgbts of color and how we fit in the overall black and gay communities. I am merely sweeping up the trash before the cockroaches can come to feed.