We should never forget the damage caused by anti-gay propaganda

James David Manning, the anti-gay Harlem pastor who has struck up an alliance with the anti-government group Oath Keepers, took to his “Manning Report” YouTube program yesterday to explain his theory of how people become gay. Just as various diseases are spread through sexual intercourse and saliva, Manning explained, so too is the “sodomite demon.” If you have had sex with or even kissed or been at the same restaurant as someone who has such “demons in their blood,” he warned, you may have been “introduced to these demons in your life, sodomy, when you had no defense.”


Some of you are no doubt laughing yourselves silly and you should. Idiocy like this is waaaay out of the mainstream.

But if your laughter leads you to forget, perhaps you need a lesson in history. There was a time when junk like this was endorsed by individuals seemingly in the mainstream. There are these images for example, which throw out pretty much the same vile connotation: 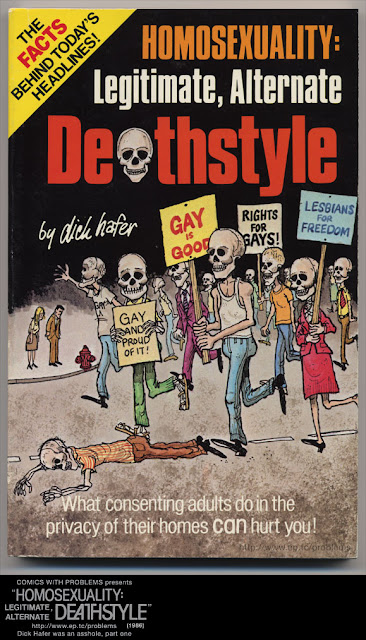 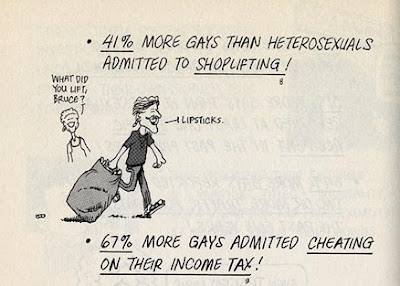 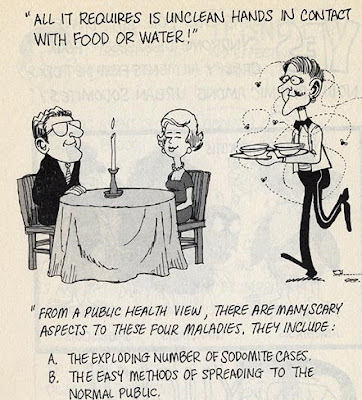 The difference between Manning and the images above from the 80s is that the images were endorsed by Congressional leaders and groups who still have a degree of relevancy and voice today. Check out the backpage from the comic book which published these images and see if you recognize these names: 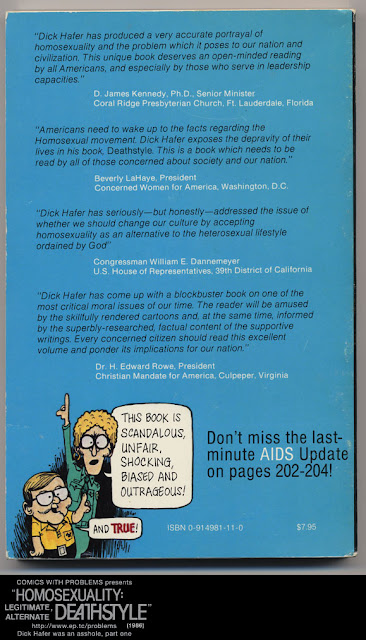 This post is my way of putting a larger emphasis on something which I feel is important to our community. As we win hard-fought battles, we shouldn't forget the prejudices, homophobia, and anti-gay propaganda which made it so difficult for us. Often times, this propaganda was spread by some of the same organizations and the same personalities we fight today. And back then, there was no Will and Grace, there was no Ellen DeGeneres, or social network of lgbt organizations and friends to shield our community and especially our kids from this mess.

No matter how painful or even comical it may seem, we shouldn't forget this propaganda, those who pushed it then, and especially those who push a new version of it today. It's like that old saying - those who forget the past are doomed to repeat it.

See how anti-gay groups push this propaganda in more muted tones via the How They See Us webpage and feel free to download a free copy of the booklet.
Posted by BlackTsunami at 3:24 PM

I agree; I think many of us are of an age where we won't forget, but younger people need to be reminded because they didn't just dislike LGBT people, they lied about them to impose all kinds of horrible laws in their thinly-veiled efforts to eradicate a group they don't like. But saying it long enough doesn't make it true; and that was what made them a laughing stock. Still, one of the voices (this published on Huffington Post, see http://huff.to/1HAFhGp for the original) asked if he could ever forgive Evangelicals. It was repeated (more or less) on the Bilerico project (see http://bit.ly/1LcPLBO for the post). I thought this was a fascinating look at this subject.

Thank you, Alvin, for posting these things and for trying to get others to see how dangerous they are to us. Some may find these things laughable but I don’t. I take them very seriously and the people who are behind them. We all need to realize that the gay-hating politicians and fundamentalist religious leaders can and will determine our quality of life and will deny us the same rights they have if they can. What has taken us almost 50 years to gain could be taken away if enough of us don’t get out and vote to keep them from getting in control as they are determined to do. We can be sure that the followers of the big-name religious leaders who are preaching that God is going to soon send His judgment on this country because of same sex marriage is going to be out in force voting for anti-gay politicians to allegedly save them and this country from what they consider to be “moral decay”, meaning our right to now marry the person of our choice and any other equal rights and treatment for us.
Mel White’s book, “Holy Terror: Lies the Christian Right Tells Us to Deny Gay Equality” is a good one to read to see just how dangerous they are.