The deliberate ignorance of anti-lgbt activists 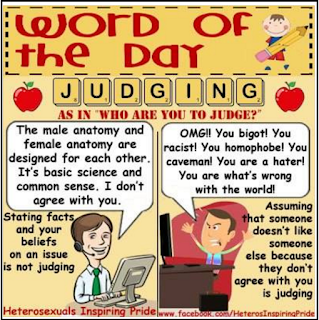 According to the above graphics from a defunct Facebook page, the argument over lgbt equality is relatively simple. One one side is a clean cut young man innocently stating his beliefs against the lgbt community and on the other is an angry person calling him names because of it.

The graphic omits a bunch of details. It omits the reliance on denigrating lies against the lgbt community, such as the comparison of gay men to pedophiles. It also omits the reliance on cherry-picked and junk science often used by folks like the young man on the left to make an argument against lgbt equality.

And it also omits the constant attempt to pass laws designed to make us second class citizens. These laws range from allowing businesses to discriminate against us on a religious basis to policing bathroom usage of our transgender brothers and sisters.

I ask them where that puts people with chromosomal disorders that makes them not have either anatomy. They usually say that's very rare, and I ask if that means if they understand what the term minority means.

That cartoon's cousin is these the dumb trope that insists the anti LGBT crowd "relies on logic and facts" while the other side "relies on feelings and emotions."

By not agreeing, he's judging LGBT people as either being Liars or being stupid - nice try bigots, no cigar.