The right-wing evangelicals of America are having another "everyone hates us because we love Jesus" pity party today. This one has to do with comments The View's Joy Behar made about Mike Pence's so-called Christian faith.

I'm not even going to try to explain this mess. I will just say that folks on that side of the political spectrum again figuratively drowned themselves with magnums of salty tears squeezed from pools of self-pity. It's another way in which they  stroke their own egos by pretending to be God's chosen people in so-called sinful, demonic, homosexual ridden world. And of course they hoisted the guest of honor in their pity part, Mike Pence, on a throne of thorns, proclaiming him as the martyr of hostility to the "Christian" community, either ignorant of indifferent to the fact that if there were truly any growing hostility it would be in reaction to them thinking that they (right-wing, evangelical, predominantly white) are the only "true Christians" in America.

Case in point is an article via the American Family Association's fake news source, One News Now, chronicling the situation between Behar and Pence. Those who are familiar with One News Now  already know that the article will be ridiculously one-sided. It's the comments which are golden. A certain individual (yours truly) made the strategic point to remind folks that it wasn't long ago that some of them attacked Obama's faith:

Your criticism of Behar may be warranted but I think there is an intentional decision to give this non-issue more attention than it deserves. Also, I can remember when a lot of folks upset over this didn't give Obama his respect when he spoke of his Christian faith.


Who knew that right-wing evangelical Christians could sprout fangs so quickly? 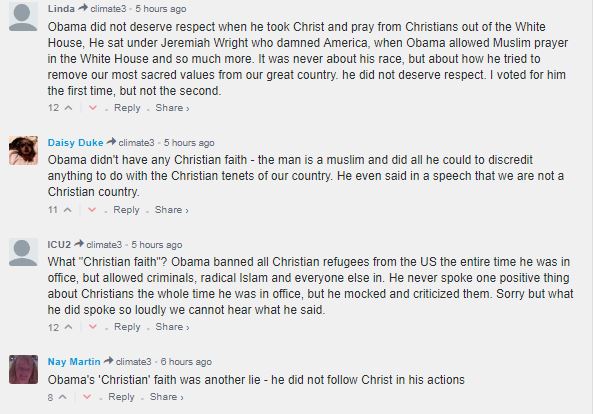 Obama did not deserve respect when he took Christ and pray from Christians out of the White House, He sat under Jeremiah Wright who damned America, when Obama allowed Muslim prayer in the White House and so much more. It was never about his race, but about how he tried to remove our most sacred values from our great country. he did not deserve respect. I voted for him the first time, but not the second.

Obama didn't have any Christian faith - the man is a muslim and did all he could to discredit anything to do with the Christian tenets of our country. He even said in a speech that we are not a Christian country.

What "Christian faith"? Obama banned all Christian refugees from the US the entire time he was in office, but allowed criminals, radical Islam and everyone else in. He never spoke one positive thing about Christians the whole time he was in office, but he mocked and criticized them. Sorry but what he did spoke so loudly we cannot hear what he said.

1. It's not a minor issue when the liberal left as a block are entirely contemptuous of Christians, and their agendas and courts are persecuting Christians 2. Obama got no respect as a "Christian" because he showed NO evidence of being one, and a great deal of evidence being a muslim in his heart. Raised a muslim. Schooled in a madrassa. Kissed the Saudi King in the very deep bow as the traditional act of obeisance of a muslim to the Keeper of the Shrines. Sided with muslims over Jews and Christians. Demanded the crucifix be covered when he spoke in Notre Dame cathedral.

Perhaps Obama's Christian faith wasn't respected because his faith appeared to be shallow and insincere, and because the congregation he attended didn't appear to be Christian.


The irony comes when you realize that it's folks like these who are credited with Trump winning the election  and if you asked them to put Trump up to the same standards they have about Obama and his faith, they would make all sorts of creative excuses to dodge the question

By the way, for those interested in the accusations made against our 44th president, the following link from FactCheck.org should prove that none of them are true - Eight Years of Trolling Obama
Posted by BlackTsunami at 4:07 PM

It is so sad that an organization like FactCheck must constantly repudiate lies about Obama and so many others. Sadder still is the fact that so many will never be convinced of truth if it hit them over the head. Is there a subspecies of humans who are irreparably defective when it comes to recognizing the the difference between truths and falsehoods? Just mind boggling. It used to be that people had differences of opinion, different values, different perspectives but could discuss and find common ground. This, it seems, is now impossible given the depth of some people's ignorance.