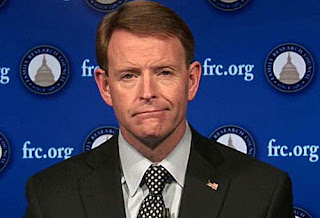 
Extreme anti-LGBTQ group the Family Research Council (FRC) brought American College of Pediatricians (ACPeds) Executive Director Michelle Cretella and ex-trans activist Walt Heyer to meet with members of Congress to advocate against the Equality Act within a day of the bill’s introduction on March 13. The bill would add “sexual orientation” and “gender identity” to existing civil rights nondiscrimination protections.

While there is limited information available on the substance of these congressional meetings, FRC’s public discussions with Cretella and Heyer around the time of the meetings pushed the debunked myth that trans-inclusive policies threaten the safety of women and girls and promoted an unvalidated hypothesis that transgender youth are coming out as a fad.

Media Matters had this to say about ACPeds and Cretella:

ACPeds is a small and extreme anti-LGBTQ group of physicians that broke off from the legitimate American Association of Pediatrics (AAP) after it began supporting the right of same-sex couples to adopt children and provide foster care. While AAP is a professional organization of 67,000 pediatricians, ACPeds reportedly has only a few hundred members. Cretella and ACPeds have worked for years to discredit trans-affirming science, and right-wing media and anti-LGBTQ groups have elevated ACPeds’ bad science by presenting the group as a medical authority.

Right-wing media add to the false perception of ACPeds’ credibility by citing the group as an alternative to trans-affirming AAP guidelines and by using Cretella as a source to dispute trans-affirming care and other trans-inclusive policies. For example, in response to an Associated Press interview with the lead author of AAP’s transgender policy about the differences between sex and gender, the American Family Association’s outlet OneNewsNow quoted Cretella disputing AAP’s points and calling the author a “transgender activist.”


Speaking of Cretella, in 2017 she was called out by the The Society for Adolescent Health and Medicine  (SAHM) for a piece she wrote denigrating the transgender community. SAHM wasn't exactly nice about it:


Recently, Dr. Michelle Cretella, the president of the American College of Pediatricians, penned a scathing attack on the transgender community thinly veiled as an argument against the dangers of transgender surgery and support; an argument based on medical omissions, circumstantial facts, hateful interpretation and peripheral context.

Earlier this month, the Adolescent Health News Roundup, compiled by Multiview and distributed by SAHM, included the article “I’m a Pediatrician. How Transgender Ideology Has Infiltrated My Field and Produced Large-Scale Child Abuse”. While SAHM welcomes opposing views and tries to include other perspectives in its weekly digest of news culled from around the internet, SAHM does not condone misinformation and hurtful, ideological opinion, not rooted in science or evidence-based medicine. The above-referenced article does not meet these standards and was included as “news” in error. It not only promotes a biased agenda, but does so with outright disregard for the facts. We sincerely apologize for including this alongside legitimate news stories and are currently revising our procedures to ensure this does not happen again.

Dr. Cretella begins with “What doctors once treated as a mental illness, the medical community now largely affirms and even promotes as normal.” She fails to reference historical medical errors with regard to mental illness such as hysteria, a catch-all diagnosis for outspoken women; nostalgia, an affliction to those who had left their home; or the color purple, once argued to drive people insane. She then lists eight “basic facts” which are anything but, and ends with a conclusion of “Transition-affirming protocol is child abuse.”

SAHM is dedicated to fighting this type of misinformation. To combat this hate speech and vitriolic deception, we would like to refute her points one by one.


SAHM contended that Cretella made eight errors and distortions in her piece and proceeded to break each one down.

Generally speaking, the Family Research Council attempting pass off ACPeds and Cretella as credible underlines a sinister, yet common practice of the anti-LGBTQ conservative right. When their beliefs and ideas don't match up to facts and experts (particularly about the LGBTQ community), they create "alternative facts" and phony experts to channel their beliefs and ideas. And then count on the conservative media industry (particularly Fox News) to amplify these "alternative facts" and phony experts while simultaneously drowning out actual facts and experts.

Posted by BlackTsunami at 5:10 PM