Evangelical right-wing groups show themselves to be hypocrites about impeachment

. . . the Family Research Council’s Tony Perkins declares that Americans do not support impeachment and Democrats should just drop it: “In poll after poll, the message from voters is the same: Enough already. If you want to remove Donald Trump from office, do it the old-fashioned way: win an election.” Perkins, of course, repeatedly called for President Obama to be impeached.


As you can see, Right Wing Watch found at least five times in which Perkins called for Obama's impeachment and one of the reasons was allowing transgender children to use school bathrooms which fit their gender identities.

On Thursday, Perkins continued with his call against Trump's impeachment:

The Ukrainian call may not be an open and closed case, but as far as Leader McCarthy is concerned, "...[N]othing in that transcript is impeachable." But, he warns, the Democrats "don't care about the facts." And either way, those facts are being lost in the noise of a relentless media, desperate to drive their anti-Trump agenda. They're throwing everything at the wall, hoping something -- anything -- will stick. Why? Because they'll do anything to distract the country from all the good this president has done. "We've made some fantastic deals..." Trump said. "We have the greatest economy we've ever had... and that doesn't get covered because you [the media] waste your time on nonsense. It's very sad what Democrats are doing to this country -- they're dividing, they're demeaning."


Such a different message from 2016 when raging about transgender children being able to use school bathrooms corresponding to their gender identities:

“If the president chooses to go forward with this outrageous order – then congress should begin impeachment proceedings . . . .  Every parent, every school board in America should absolutely refuse to sacrifice the safety of their children for the threat of taking away nine federal pennies that make up every educational dollar."


This got me thinking about who else in the religious right defending Trump from impeachment did  the opposite when it came to Obama. It wasn't difficult to find another.

Recently another right-wing evangelical group, the Liberty Counsel, was circulating a petition defending Trump on its website and Facebook page: 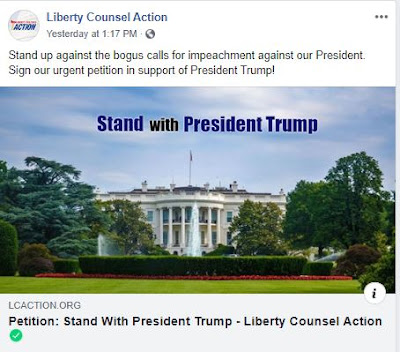 But in 2014, the group had a very different belief with regards to impeachment when Obama was in the White House: 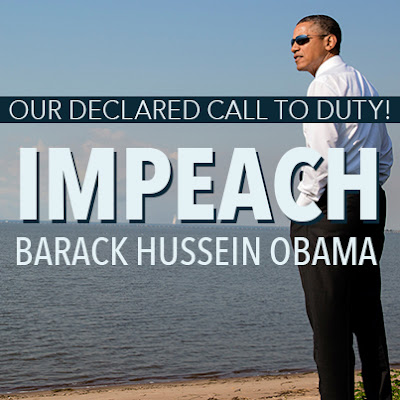 
It doesn't make sense, but it's not supposed to. But it should serve as a reminder when it comes to the hypocrisy of the evangelical right. For FRC and the Liberty Counsel, impeachment seems to be less about preserving integrity and more about protecting their golden goose or punishing someone they perceive as the enemy.

Posted by BlackTsunami at 5:33 PM

The republicans never had an integrity, code of ethics, or moral core. They have always been just a bunch of greedy selfish fascists, racists, liars and frauds.