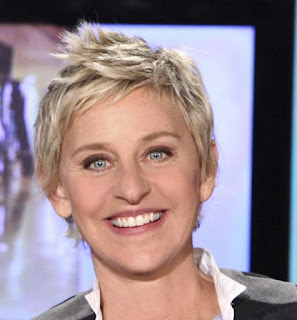 This controversy with some folks - particularly in the LGBTQ community - getting angry at Ellen DeGeneres because she chilled with former president George Bush at a ball game is some straight-up exhausting bullshit.

I get the anger about Bush with regards to the lie about weapons of mass destruction and how he exploited homophobia to get re-elected in 2004. I agree that he has a lot to answer for.

Lastly, if you pardon me for saying so,  the entire so-called controversy is nothing more than low-hanging fruit. An easy way for folks to publicly declare how outraged they are.

Meanwhile on Tuesday, the LGBTQ community found ourselves at the Supreme Court to yet AGAIN battle a group determined to undermine our equality with an over $50 million budget and an arsenal of attorneys to match. I'm talking about the Alliance Defending Freedom. The Southern Poverty Law Center may call them a hate group, but too many mainstream groups and officials call them "daddy," "buddy," "comrade," etc. etc. And ADF has been using that influence to undermine the LGBTQ community over the years. But you wouldn't know that.

There was little outrage when ADF was writing anti-transgender legislation for state legislatures across the nation to pass. ADF was behind the bathroom bills we've had to fight on a nationwide and state-by-state level.

There was little outrage  over the fact that ADF has been responsible for almost every recent anti-gay ruling and court case from the Masterpiece cake shop to letting religiously based adoption agencies steal gay tax dollars in Michigan to allowing businesses in Arizona to discriminate against gay couples.

There is little outrage when Fox News gives ADF an uncontested platform via its "news program" to spew lies about LGBTQ court cases?

And very few people are expressing outrage as the organization worms its way in the Trump Administration and its affiliate lawyers are infiltrating our court system and are given lifetime appointments as judges.

ALL of this has been going on while we've been having "discussions" about privilege and wasting attention on situations  that really don't matter to anything other some venting. Basically, I don't care about who Ellen DeGeneres schmoozes with or grins at. I do care that our world could come crashing down because we didn't pay attention to  the parties knocking down our walls. I care that yet again, the LGBTQ community is busy chasing the shiny objects or immersing ourselves in celebrity culture while the wolves have gone beyond our door and are now in our living rooms making themselves at home.

One hundred and thirty-three people got arrested protesting outside SCOTUS on Tuesday. Wouldn't it have been nice if one hundred and thirty-three people protested at ADF headquarters? Or passed along videos and articles about ADF to their friends and neighbors months ago? Or held forums, across the nation about ADF?  Ellen DeGeneres isn't plotting new ways to mess with the LGBTQ community. And neither is George Bush.  But Alliance Defending Freedom is. Can we pull ourselves away from posturing to at least acknowledge that?


As always, Alvin, you help us to keep our eye on the prize of maintaining consistency in our fight against LGBTQ inequality.
Where is the moral outrage?
Indeed. I get the feeling many of us left our outrage on the alters of marriage equality.
The struggle is real, ongoing and still formidable.