Dear Chick-fil-A, welcome to our world

The latest in the religious right's "How dare Chick-fil-A betray us! We are going to grind them into dust!" saga came my way via email from Tim Wildmon, head of  hate group the American Family Association : 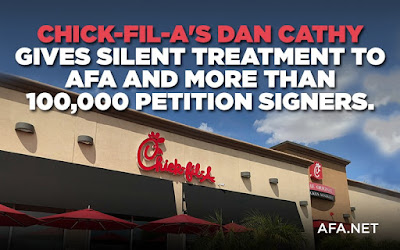 On Monday, December 2, I overnighted a letter to Chick-fil-A CEO Dan Cathy. In the letter, I asked him to clarify statements made by the leadership of Chick-fil-A and the Chick-fil-A Foundation. You can read the letter here.

As you know, Chick-fil-A recently said it would no longer be supporting The Salvation Army and Fellowship of Christian Athletes. Moreover, the Chick-fil-A Foundation announced its support of Covenant House, an outreach that affirms homosexual orientation and funds LGBTQ causes.

At the time I sent this email to you, Mr. Cathy had not responded to my letter. This is disappointing.

Specifically, I asked Mr. Cathy to answer these two questions: (1) Will Chick-fil-A publicly state that it does not believe The Salvation Army and FCA are hate groups because of the ministries' beliefs about sexuality, marriage, and family? (2) Will you publicly state that Chick-fil-A will not hesitate to fund these two ministries again, should the opportunity arise in the future?

Along with the letter, I included the signatures of over 100,000 people who want clarification from Chick-fil-A regarding its recent decisions.

This means that Mr. Cathy has not only snubbed AFA's concerns, he has also chosen not to respond to your concerns.


If Chick-fil-A is truly funding the Covenant House, then it's a good thing and more power to the restaurant. But I still won't be singing its praises any time soon. I'm indifferent about the entire thing mostly because I remember how, in 2012, reasonable attempts to explain the LGBTQ community's problem with the fast food restaurant got overwhelmed by lies generated by Mike Huckabee that Chick-fil-A was supposedly being attacked because its "Christian" values.

I remember that nonsense called "Chick-fil-A Appreciation Day" in which members of Congress, hate groups like the Family Research Council, and scores of people filled the restaurant based upon false information about persecution or just a chance to give the LGBTQ community a figurative slap in the face.

But I will say this to Chick-fil-A and Mr. Cathy - welcome to our world. And expect to get blitzed constantly by AFA and other members of the religious right who feel that you betrayed them. I know that you're a business and the first rule is always to make the money. However in your pursuit of this goal, you aligned yourself with some wild fanatics. And it's not going to be easy to deal with them now that they think you betrayed them.

Take it from me, a gay who has monitored and watched their actions for a number of years. With the religious right, it's all about position and entitlement. They don't want you to feel sorry. They want you to be sorry. You publicly insulted them. You violated their world order; their ideas of themselves as "God's anointed people." Just like they have fought against the LGBTQ community because in part they want to send the message to us that they consider us as lowly sinners, they want you to figuratively crawl and beg for daring to go against their ideas of values and morality.

So my suggestion is this - stick to your guns, whatever they may be, or buy yourself some sturdy knee pads.
Posted by BlackTsunami at 4:54 PM

The biggest mistake Chick Fil A actually made here is trying to have it both ways. If they really wanted to improve their imagine with the general public, ( assuming that's actually what they're trying to do, and it sure seems like it ) than they should have gone all the way, and Dan Cathy should have denounced his opposition to marriage equality and promised to never endorse groups that promote anti LGBT bigotry again. You can't have it both ways, you either stand up to bigotry or you don't. This seems to be a charm offensive, but its a charm offensive that won't work.