To hear or read anti-LGBTQ hate groups like the Family Research Council or the American Family Association tell it, our community shouldn't be worried about Donald Trump. Apparently we are too busy raising hell.

First there is this "tasteful" image courtesy of FRC: 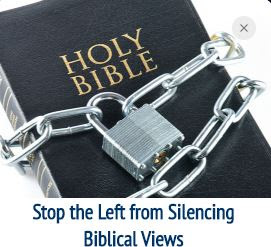 And when FRC says "the left," you just know that we are front and center. And locking up the Bible in chains it appears. I thought we saved the chains for each other via sexual play. At least that's what FRC and the others used to accuse us of doing.

But when it comes to spinning itemized hysteria, FRC takes a back seat to the American Family Association.  AFA has a list of the havoc we have allegedly accomplished. And even though you should take AFA's rendition of these events with a grain of salt, it still makes me feel rather butch to be a part of a large group who can supposedly cause this much ruckus:

In the past three decades, LGBTQ activists have demanded the embrace of homosexuality by society and the church. This LGBTQ demand for “equality” has gone viral, and its stormtroopers take no prisoners.

They don’t allow Christians to take a “hate the sin, love the sinner” approach. No, they would say that by not affirming homosexuals, we are fostering what they call “hate.” And they desire to outlaw hate and punish those who preach it.

Many Christians don’t know how to stand firm when criticized on this issue. They understand what the Bible teaches on this topic, but the idea of being called a “hater” is mortifying to them, so they try to straddle the proverbial fence. It happens a lot. Here are some examples:

The Boy Scouts of America: While not an explicitly Christian organization, the BSA upheld Christian values to millions of young boys for decades. In recent years, they have completely sold out to the homosexual cause.

Tim Tebow: What a great example for boys across America this man has been. Yet, when the LGBTQ groups applied pressure on him, he canceled a speaking engagement at First Baptist Church in Dallas, Texas, because the church teaches that homosexuality is a sin and he wanted to avoid controversy.

Louie Giglio: The founder of the Passion youth gatherings, Giglio was one of my favorite Bible teachers. He was asked to pray at President Obama’s second inauguration, but when a 20-year-old sermon surfaced in which Giglio warned against the rise of homosexual activism in America, he was severely criticized by the LGBTQ community. Giglio sheepishly withdrew from the event and then would not even reaffirm his own sermon.

Beth Moore: Millions of Christian women would attest to the value of her teaching over the last 20 years. It was learned recently that Moore went back to a book she wrote years ago and removed references critical of homosexuality. When asked if she still believed it to be a sin, she would not respond.

Steph Curry and Russell Wilson: Both sports stars, with ties to North Carolina, have been very public about their Christian faith. However, when the state passed a law to keep men out of girls’ restrooms and showers (on state property), both Curry and Wilson sided with men being allowed in girls’ restrooms.

Lauren Daigle: The music of this popular gospel singer has blessed millions of people. Recently she was asked her view on homosexuality being a sin, and she responded with this answer: “I can’t honestly answer on that. … I can’t say one way or the other.”

Drew Brees: NFL quarterback is well known for his strong Christian faith. A few months ago, Brees did an advertisement for “Bring Your Bible to School Day,” sponsored by Focus on the Family. When a local New Orleans LGBTQ newspaper called Brees out for supporting a “hate group,” the quarterback went into panic mode and basically disavowed Focus on the Family.


And all of that was simply a prelude to (drumroll, please):

The most recent example is Chick-fil-A. This is a company founded on Christian principles – and it is extremely popular in the Christian community because of that fact. Chick-fil-A got into hot water with LGBTQ groups when CEO Dan Cathy said in 2012 that he believed in God’s definition of marriage between a man and a woman. Cathy was spooked by the blowback and then tried to separate his private beliefs from his company.

It didn’t work, and Chick-fil-A has been targeted by the Left ever since, especially because the corporation made donations to groups like The Salvation Army and Fellowship of Christian Athletes. These are “hate” groups, according to the Left. Recently Chick-fil-A ditched The Salvation Army and FCA only to name an LGBTQ affirming organization (Covenant House) as one of their new benefactors.


One correction. The claim that we don't take prisoners is wrong. We do in fact take prisoners. Then we torture them with bad versions of Broadway musicals (such as Lucille Ball in Mame) until they consent to be gay.
Posted by BlackTsunami at 4:33 PM