Former Trump White House press secretary Sarah Huckabee Sanders made the news recently by announcing that she may be eyeing the governorship of Arkansas.

And she has already got one high-profile person in her corner:


There's talk about @SarahHuckabee running for gov. She told @NYTimes there’s a difference in someone who wants to be a senator or governor & someone called to serve. We need more people like her who are called by God to serve in positions of leadership. https://t.co/ogeEreWua1
— Franklin Graham (@Franklin_Graham) November 30, 2019 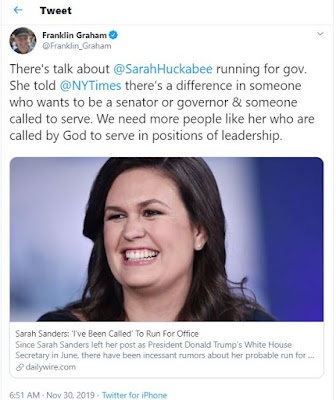 That's Franklin Graham on his ministry's official Twitter address (with 2.1 million follower) inferring that people support Huckabee Sanders should she run for governor. His ministry made him worth $10 million last year and he pays no taxes on it.

Somehow I don't think God is in need of her services. And neither should be the citizens of Arkansas.  But the point is whether or not Graham outright said "vote for her," the implication is the same. He is exploiting his position as a prominent pastor to endorse Huckabee Sanders for political office. It's inappropriate & underscores that white conservative evangelicals are out of control because of Trump.

They support him because he caters to their feelings of victimhood and illusions of superiority. He makes them feel like they are the lords of American society where their view of Christianity come first instead of what they actually are - a small component of a greater, multi-religious, multi-cultural society in which they are going to have to learn to share.

And here is Franklin Graham, their drum major of ignorance, casting the shadows of hypocrisy and spinning tales of demonic plots while he is freely using his reputation as a pastor and his ministry to hide the smell of brimestone he's creating.

Keep it up, Frankie. You're gonna get yourself burned.

Posted by BlackTsunami at 5:22 PM