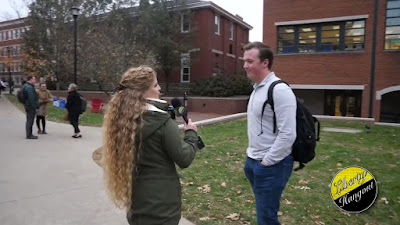 (Editor's note - Unfortunately the tweet seems to have been deleted. I apologize for that. Please click on the 'Courier Journal'  link below to read the conversation between Haase and Bennett.)


We all know that conservatives and the anti-LGBTQ industry have targeted the transgender community as their new moral panic. From spinning false claims about trans athletes to pushing "bathroom bills" designed to exploit fears about safety in restrooms and locker rooms, they have been working overtime.


And so enters Michael Hawse, a student at the University of Kentucky.

From The Courier Journal:

A University of Kentucky student gained some notoriety after a video went viral of him discussing the transgender bathroom issue with conservative personality Kaitlin Bennett, aka the Kent State "gun girl."

. . . In the video, Bennett, the media director for libertarian outlet Liberty Hangout, who is best known for posing with an AR-10 on Kent State University's campus for graduation photos, asks (Michael) Hawse what he thinks of putting urinals in women's restrooms "for women who have penises and they just want to stand and pee?" "I think people (are) just making too big of a f—king deal about it," Hawse responded, with the curse word bleeped out by a sound effect. "I don't really care."

And as Bennett asked him for more details, Hawse continued to be succinct:


Hawse's bluntness in the face of such a pathetic attempt to stoke controversy should be applauded. It's not an issue and wouldn't be if conservatives and the anti-LGBTQ industry had not have spooked people with horror stories appealing to the lowest common denominator of fear . . . just like they did in the case of marriage equality, anti-discrimination ordinances, LGBTQs serving openly in the military, etc. etc.

Hawse's encounter with Bennett went viral, so he decided to use it to spotlight a good cause:

The video of Hawse’s comments had been viewed more than 19.6 million times on Twitter as of Monday afternoon. Hawse responded to his new fame via Twitter on Monday. “I don’t make a habit of paying attention to what others are doing in the bathroom.” He later tweeted a Venmo account to raise money for DanceBlue Golden Matrix Fund, which raises money for pediatric cancer research.

Posted by BlackTsunami at 4:26 PM

Link does not work. Page does not exist.

Which link to which page?

BlackTsunami said...
This comment has been removed by the author.
5:28 AM

Thanks Frank. I HATE that the tweet was deleted but the article I linked to has the conversation.