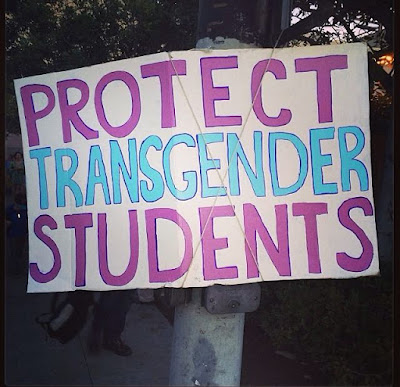 Wonderful news out of South Dakota. From NBC News:

The South Dakota Legislature on Monday effectively killed House Bill 1057, which sought to block physicians in the state from providing puberty blockers and gender confirmation surgery to transgender children under 16.

By a 5-2 vote, the state Senate Health and Human Services Committee sent the bill “to the 41st day,” which means a bill has been effectively killed because the state’s part-time Legislature has only 40 working days.

"It's gone," Quinncy Parke, 17, who is transgender and testified against the bill, told The Associated Press. “I don’t have to worry about it until next year.” The ACLU of South Dakota, which had led the fight against the bill, cheered its apparent demise.

“Though supporters claimed House Bill 1057 was aimed at protecting vulnerable youth, it was clearly fueled by a fear and misunderstanding of transgender South Dakotans,” said Libby Skarin, policy director for the group. “It’s time we stop these attacks and the very real harm they cause to transgender youth across our state. Let this be a signal to the South Dakota Legislature that discrimination against a marginalized group is a distraction from the needs of the state and hurts us all.”

Effective organizing and talking to the legislators, particularly from the trans children who would be negatively affected by the bill if it became law

Trans youth like Elliot James, 16, have been meeting with their senators on the committee, asking them to vote no on #HB1057 pic.twitter.com/mfhkEgKFKN
— Logo 🏳️‍🌈 (@LogoTV) February 10, 2020

#NCLR is relieved to see that @ACLUSouthDakota & all the trans advocates/activists in SD were able to kill #HB1057 this year in Committee. 💙🏳️‍⚧️

But we so many other terrible bills like this one in states around the country, we won't let our guard down!https://t.co/PlNgdK36tY
— National Center for Lesbian Rights (@NCLRights) February 10, 2020

new @HRC video out today: Quinn Parke is a South Dakotan who loves their state but not the anti-trans legislation that SD legislators continue to push. Watch their story about what's at stake as lawmakers debate the harmful #HB1057 in Pierre today: https://t.co/kQevMftLPG
— Nick Morrow (@NRMorrow) February 10, 2020


Let this be a lesson to us all. Sometimes when you have no alternative, marching in the streets is necessary. But you don't have to wait until it gets to that point. You have to do the things which seem hard. Talk to legislators, communicate with them. Lobby as hard as you can. Maybe you will win.  Maybe you will lose.  But making your voices heard is a lot better than waiting on an inevitable situation which you can work to prevent.

Posted by BlackTsunami at 3:33 PM