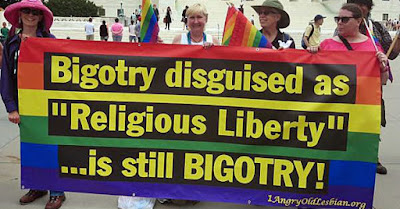 I don't think the anti-LGBTQ industry were prepared for their loss at SCOTUS on Monday. When we defeated the sodomy laws, they were already knee deep in constructing the narrative against marriage equality. When we won marriage equality, they had a ready-to-go narrative on how our right to marry would harm "religious liberty."

Monday's decision caught them by surprise. And they continue to sputter. From Family Research Council head Tony Perkins:

The question now is, where do we go from here? Let's start by putting the ruling in context. Will it mean a ferocious fight on religious liberty from here on out? Almost certainly -- but to be fair, any result would have done the same. LGBT activists weren't going to surrender to the justices' opinion and abandon their cause no matter what the court decided. Nor should we. A positive ruling might have kept some of the fiercest questions at bay -- and given faithful Americans some much needed relief -- but let's face it: the waves of extremism never stop.

What about Gorsuch and President Trump? Can we trust them? While the Harris case has given Gorsuch fans cause for concern, we don't have to guess where this president stands. For three and a half years, his administration has taken every opportunity to protect religious freedom in executive orders, rules, and guidance that reaffirm the politically incorrect truth about sexual orientation and gender -- often at great political cost. Every agency from HHS, Defense, and Education to HUD, Agriculture, and Justice have stuck their necks out to roll back the radicalism of the president who first opened this Pandora's box.

As for Trump's judicial nominees, voters have to ask themselves: would they rather have some uneasy feelings about one -- or know with certainty that every single pick is a died-in-the-wool liberal activist, like we would under Joe Biden? This is a single, devastating judgment in what has so far been a stellar couple of years for Trump's first Supreme Court pick. It may confirm concerns that some had about Gorsuch, but this should set the stage for the next nominee to be beyond reproach when it comes to the meaning of words and adherence to the constitutionally defined role of the court.


Meanwhile, Franklin Graham pulled his head out of Donald Trump's backside to rage:

“As a Bible-believing follower of Jesus Christ, my rights should be protected,” Graham writing on Facebook about the SCOTUS decision, insists. “Even if my sincerely held religious beliefs might be the minority, I still have a right to hold them. The same holds true for a Christian organization. These are the freedoms our nation was founded on.”

“I believe this decision erodes religious freedoms across this country,” the evangelical Christian preacher continued. “People of sincere faith who stand on God’s Word as their foundation for life should never be forced by the government to compromise their religious beliefs.”

“Christian organizations should never be forced to hire people who do not align with their biblical beliefs and should not be prevented from terminating a person whose lifestyle and beliefs undermine the ministry’s purpose and goals,” he added.


SCOTUS's decision had nothing to do with religious liberty nor will it force Christian organizations to hire gays. However,  the fact that Perkins and Graham choose argument may provide a clue as to where the anti-LGBTQ industry wants to pull their loss. The Supreme Court has established that LGBTQ people are protected from job discrimination, but what about religious exemptions?

According to U.S. News and World Report:

. . . conservative attorneys who focus on religious liberty note that the Supreme Court will soon face cases that could firm the ground for faith-based exemptions from the employment discrimination ruling. One key test will come this fall, when it takes up the case of a Roman Catholic foster agency in Philadelphia that saw its relationship with the city severed because it wouldn’t place children with same-sex families. The court is being asked to reexamine a 30-year-old decision that, if overturned, could create a broad religious exemption from generally and neutrally applicable laws. “It’s clear that the court is interested in protecting religious liberty and is asking folks to raise these issues so the courts can decide them in the future,” said John Bursch, a senior counsel at the conservative Alliance Defending Freedom who argued one of the cases that was consolidated for this week's ruling.


My personal feeling is that the anti-LGBTQ industry will attempt to stretch the religious exemptions as far as they can. This means not only religious organizations, but also secular businesses whose owner have a supposed "personal and deeply held abiding belief."  We've seen them already attempt  this via an Arizona case in which they claimed that laws and ordinances protecting the LGBTQ community from discrimination is automatically an attack on 'religious liberty' And in the upcoming SCOTUS case with regards to adoption agencies, they will also attempt to use religion as way to allow them to discriminate against the LGBTQ people while freely grabbing LGBTQ tax dollars.

The argument we have to put forth is one of basic fairness. It's easy to get bogged down in tangents about religion and different tenets of faith. But what must always be pushed to the fore is the simple fact that no one's religion gives them a free card to not abide by rules of fairness. Nor should it be used to grant special privileges to treat others like second class citizens.

It's going to be interesting to see how this turns out. People like Perkins and Graham are going to definitely accelerate the weaponizing of religious beliefs as a tool for discrimination. And they may just be successful at it. But in the long run, it's going to backfire on them.

It's always easier to dip something elbow deep into the mud than it is to get the mud cleaned away after you're done.
Posted by BlackTsunami at 5:01 PM