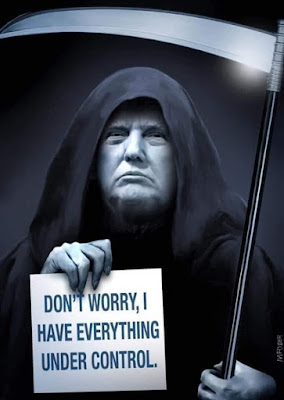 I have so many reasons why I hope Trump loses in November, but this exchange which just happened reaches number one:

Trump's message about the US hitting 200,000 coronavirus deaths is to try and pass blame to China pic.twitter.com/Z2OlvxG7dy

Right now, I know that so many of us are angry and galvanized about the death of Ruth Bader Ginsburg and the eagerness of Trump and Republicans to put a hardline conservative on SCOTUS in her place. And of course we should be. But we cannot be distracted from his past and continued undermining of the fight against the COVID 19 pandemic.
On Monday night during one of his "rallies," Trump said the coronavirus affects "virtually nobody."  I thought that was the worse thing he could have said about the pandemic, but the exchange today with the media tops it.  It proves that Trump didn't botch the response to the COVID 19 pandemic via incompetence alone. He simply didn't care. And he continues not to care.
The nearly seven million Americans who are infected and the over 200,000 Americans who have died  aren't nobodies. They were somebody's children, parents, grandparents, friends, neighbors, husbands, wives, etc.  Most of all, they were people who Trump swore to defend and protect when he took the oath of office. And he failed them.
Deliberately.
There should be no lie which any Trump supporter (including those in the media) can spin about the economy, Joe Biden's supposed dementia, conservative judges, political correctness, or anything else which should alter or mitigate in the least any contempt we should feel towards him for this pandemic disaster. Trump has blood on his hands. And if he's reelected, America is saying that we are okay with it.
Posted by BlackTsunami at 5:05 PM

The daily atrocities from this so-called president are too numerous to keep track of. But he has become so emboldened and thinks he is invincible. The greater the atrocity, the more manic his brainwashed base becomes. He must be defeated, and by an incontrovertible margin.