The festive card company, which has released a slew of holiday-themed films through its TV network, the Hallmark Channel, has previously faced criticism for a lack of diversity. The Hallmark Channel showed its first same-sex wedding earlier this year, in the film Wedding Every Weekend, which debuted in August. The Christmas House follows Brandon Mitchell (played by Mean Girls’ Jonathan Bennett) and his husband Jake (Brad Harder) as they try and adopt their first child

The movie premiered Sunday and, as Heidi Stevens of the Chicago Tribune put it, "the Earth continued to spin on its axis."
That is with the rest of us. Amongst the anti-LGBTQ right and its supporters, it struck like a calamity of Biblical proportions. The usual cast of characters threw a fit. They made sure to treat the situation like a case of LGBTQ people acting like the zombies of World War Z, albeit better dressed and with a more festive attitude, while we "forced" Hallmark to cater to our supposed agenda.
One anti-LGBTQ activist said the following:

Monica Cole of One Million Moms says she saw it coming. Hallmark executives began feeling the pressure last year, she recalls, when powerful LGBT groups pushed for more “inclusive” content after the channel, owned by Crown Media, stirred up their anger by caving to Cole's group over a TV ad. In a two-week tug-of-war, Cole and One Million Moms had convinced Hallmark to pull a Zola ad featuring kissing lesbians only to watch the other side howl in protest. Hallmark reinstated the ad and apologized for the "hurt and disappointment" it had caused.

But Cole's objections can't even begin to rank to the anger expressed by those sending in comments on the same site which quoted her (click on the graphics to read them): 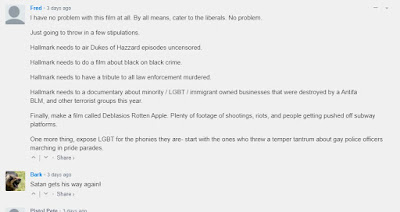 Personally, I like the fact that these folks are voicing their opinions. It proves a point.
These days, there is a general deception going on, a certain gaslighting perpetuated by certain dishonest individuals. They've attempted to turn the argument from a quest for LGBTQ equality and safety to a false concern about them being unfairly thought of as "bigots" if they voiced their supposed religious opinion about "sinfulness" of homosexuality.
The trick is that they are so busy playing the martyr that we don't specifically examine the opinions they express. When we do, by either spotlighting their written words or getting them to say exactly how they feel, the conclusion can almost always be that the views they express are mean and bigoted.
Also, consider this. When I was growing up, channels and television shows publicly showed very few LGBTQ relationships  When it would happen, there was so much unnecessary controversy and lies told about oversexed gays, diseased gays, AIDS, pedophilia.
Talk shows like Donahue and Oprah would talk about it. Congress would probably condemn it, and LGBTQ people, especially our kids, would be forced to go deeper into our closets for fear of negative exposure and violence. Very rarely would we be allowed to have a voice in the conversation.
Well those days are done. Over with and through. And they aren't coming back.
LGBTQ people shouldn't be forced to accommodate the feelings of people who want to render us invisible or who think of us as evil sinners and then have the audacity to get offended when we call out their bullshit. LGBTQ people are not put on this Earth to accommodate the prejudices and egos of those who either outright dislike us or claim to have no problem with us as long as we play a role for their benefit - i.e. the sexless, soulless thing who chooses a lifetime of beleaguered silence and humiliating repression.
Neither their religious beliefs nor their false feelings of superiority is our problem. We are not here for their will and pleasure. And as such, we do not have to live our lives in accordance to what they want. Nor do we have to express our visibility in accordance to their wishes.
Our lives matter just as much as theirs. Our families and children matter just as much as theirs. And so does our visibility and the right to receive that visibility as we see fit.
If folks are angry because Hallmark showed a gay-themed Christmas movie, then let them stay mad. They don't have to watch it or they choose to watch it with their pressure going up and the crimson in their faces getting redder and redder. They can have a heart attack for all I care.
Posted by BlackTsunami at 5:03 PM