Editor's note - my posts should not be considered 'gotcha moments.' They are truths which we constantly need to be reminded of.  There are groups and personalities out there who claim to be religious. They claim that they are morality and integrity-based, but their tactics are deceptive. They deliberately traffic lies which harm LGBTQ rights and safety. And, as we  see with this post, the modus operandi they use when stigmatizing LGBTQ people is also being employed in other areas.

After last Wednesday's riot at the Capitol, online services are clamping down on those who have been spreading false stories which contributed to the situation.  An online app geared to conservatives, Parler, has  been removed from several social media sites.

Since 2018, Parler was the home for many kicked off of Twitter for violating its rules of conduct. It's also the home of many conservative and Republicans, including members of Congress, conspiracy theorists and far right activists. Some of these individuals post violent content, which Parler does not clamp down on in the name of "free speech." Because of this and in view of last Wednesday's terrorist attack at the Capitol, companies such as Amazon, Google Play, and Apple removed it from their stores.

But to hear the Family Research Council and its president, Tony Perkins tell the story, this clamping down is censorship on conservative views.:

Most Americans thought they understood censorship. They've watched it evolve and expand this last decade, scooping up more people in its nets in the name of "tolerance," "diversity," and "non-violence." But what happened this weekend was not a tweet blocked here or an account suspended there. No, this was much more ominous. What Twitter, Facebook, Google, and Amazon did by locking out the president wasn't just a heavy-handed punishment of Donald Trump and his supporters -- it was a scorched-earth campaign against the tens of millions of people who dare to think differently than they do and the open forums that give our movement a voice.
"Amazon will be shutting off all of our servers," Parler's John Matze announced to stunned surprise on Saturday. It was the second major bombshell to drop in the new war between Big Tech and the other half of the country. After careful, behind-the-scenes coordination from Silicon Valley's chiefs, the popular alternative to Twitter was scrubbed from the Apple store, Google Play, and any other place users could download the app. "We will try our best," Matze insisted, "to move to a new provider..." But in the meantime, the message to conservatives is clear: Big Tech isn't just coming for Trump. They're coming for all of us -- and corporate America isn't far behind.
The Tech giants used the claim that Parler allowed its platform to be used to advocate and coordinate violence at the capitol last week. If there was ever a case of the pot calling the kettle black, this is it. Homeland Security was forced to weigh-in this past summer in a letter to the social media giants saying the popular platforms appeared to play a role in facilitating "burglary, arson, aggravated assault, rioting, looting, and defacing public property." Are Twitter and Facebook responsible for the burning of Portland or the siege of Seattle? Then why are they holding Parler to a different standard? . . .  This isn't about upholding any rules. This is about cutting off the oxygen to free speech on the Right.

But Perkins, like he has done so many times in the past,  is committing the sin of omission According to The Independent:

Amazon had told Parler that it had seen “a steady increase in this violent content on your website, all of which violates our terms”. Amazon Web Services sent a detailed letter to the company including instances of such violent content and making clear that it believed Parler did not have an effective process to comply with the AWS terms of service.

Google had the same issue.
And according to BBC News, after last year's election in which Biden defeated Trump, the content on Parler became more disturbing:

For months, Parler has been one of the most popular social media platforms for right-wing users. As major platforms began taking action against viral conspiracy theories, disinformation and the harassment of election workers and officials in the aftermath of the US presidential vote, the app became more popular with elements of the fringe far-right. This turned the network into a right-wing echo chamber, almost entirely populated by users fixated on revealing examples of election fraud and posting messages in support of attempts to overturn the election outcome. In the days preceding the Capitol riots, the tone of discussion on the app became significantly more violent, with some users openly discussing ways to stop the certification of Joe Biden's victory by Congress.

CNBC said that Amazon informed Parler that it found 98 posts which encouraged and incited violence. It also said the following:

Screenshots of the Parler app viewed by CNBC show users posting references to firing squads, as well as calls to bring weapons to the presidential inauguration later this month.

Lastly, CNBC pointed to a New York Times interview with Parler CEO John Matze in which he said neither he nor Parler should be held responsible for its violent content.
That's quite a different tone than that expressed by Perkins of Matze being a victim of censorship. He sounds more like a polluter not accepting responsibility for the areas he's damaging.
The following are just two examples of what was on Parler (hat tip to the Secular Progressive Humanist blog). Perhaps Tony Perkins should spend less time defending people and posts like these and more time explaining why should people care about conservative views if they include people and posts like these. 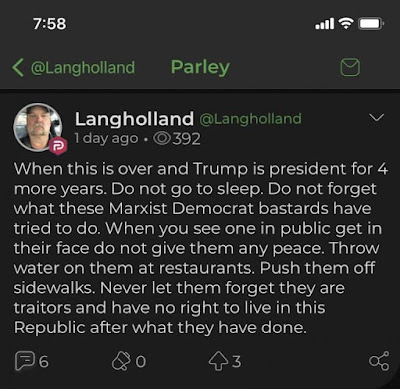 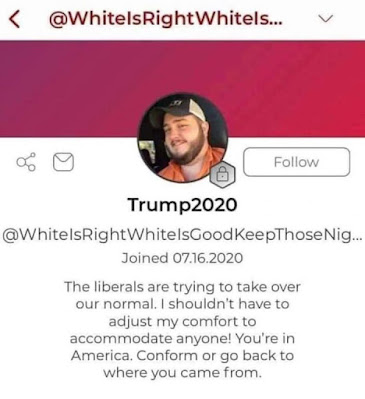 Posted by BlackTsunami at 4:30 PM