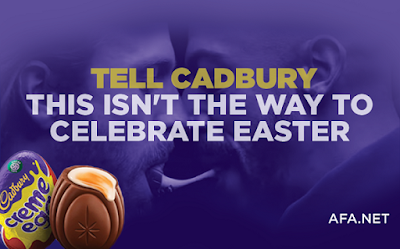 After four years of Trump, I guess we're back to normal with the religious right snatching up its petticoats and screeching about "homosexual indoctrination," boycotts, and cries of "won't someone PLEASE think of the children."

I received this email via the American Family Association:

If you look forward to having your annual Cadbury Crème Egg each Easter season, you might not like how the company celebrates the risen Savior. Cadbury just released a commercial that has resulted in a backlash of comments from Christians and non-Christians alike. Everything from "disgusting" and "very disappointing" to "yech" and "gross."
Todd Starnes best describes the ad this way: "It's like Disney's 'Lady and the Tramp' scene where the two dogs share spaghetti. Except, it's two grown men spinning around in a circle and sharing a creme-filled chocolate egg in a sexualized way."
The 10-second segment is part of a longer commercial called "Crème Egg Golden Goobilee," showing ways to eat a Cadbury Crème Egg. You can see it here. Warning: This video is graphic and offensive. Cadbury makes a huge push to sell its Crème Eggs in America during the Easter season each year.
A portion of each sale goes to help finance Cadbury's social agenda that has nothing to do with chocolates and candies. If U.S. sales are strong, Cadbury just might bring this ad to American televisions for your children to see. Taking a stand now will send a strong signal that their eggs are cracked up.

First of all, there is no controversy about this commercial (except for the AFA) and Todd Starnes (who probably wishes he had someone to share a Cadbury egg with). But as hinted by AFA and confirmed by an LGBTQNation article, this ad isn't even running in America.
It's a British commercial.
But since grifters have to grift, AFA linked to a 10 second segment about the ad:

It’s the Creme Egg Golden Goobilee… and we are down with sharing! Would you share your Cadbury Creme Egg? Tell us in the comments! pic.twitter.com/mqZqWlHsvr

Naturally some of the comments have been negative while others have been supporting. Normally when I do things like this, I showcase only the negative reactions. However, seeing that I turned 50 on Monday, my mind has entered a partial "don't give a f@k" phase of life. Therefore, I will not only be spotlighting some of the negative comments, but also the snappy comebacks to them, some of which are provided by me: 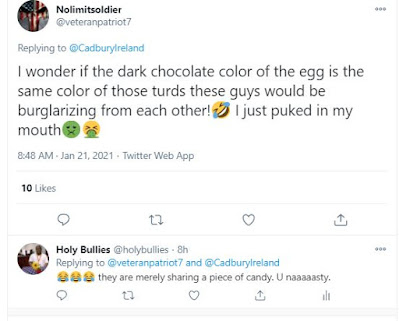 Posted by BlackTsunami at 4:00 PM

Oh i bet that upset them to no end. I didn't like it either, but for different reasons. Who cares about Cadbury eggs? Not me. I always keep Easter because it is a pagan holiday. I resent the relentless commercialism. I don't like these hypocrite Christians. I don't like Cadbury eggs telling us to buy their crap. I keep Easter as a time for remembering, and a time for new beginnings.