Up to now, the ridiculous exploits of Q-Anon Congresswoman Marjorie Taylor Greene have been either mildly amusing to mediumly annoying. But now Miss Thing is stepping way over the line.

Following earlier attacks on embassies flying Pride flags, she yesterday took to Twitter to lambast what may or may not be on the school curriculum. Greene shared a video of a 14-year-old girl recently testifying before a school board meeting in a suburb of Indianapolis. The girl has not been named. In the clip, the youngster, who has certainly had a difficult upbringing in her formative years, talks of being a “trauma child” and of being adopted from a foster home when she was four. She complains about being taught about sexuality at school, which she believes should be a private matter. She also says she cannot see how she has white privilege, given her own background.

I saw the video and I refuse to share it. The child was obviously being exploited to play against the need for appropriate sex education, support for our LGBTQ kids, and teaching about historical racism.

And Ms. Greene took it a step further with the following tweet: 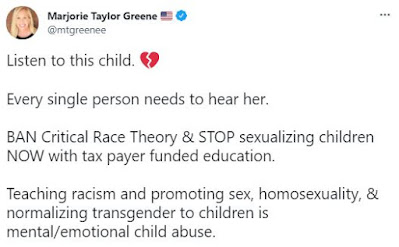 First of all, Greene continues to tell the lie that Critical Race Theory, a legal argument, is being taught in K-12 schools. No matter how many times this has been debunked, the lie continues to be repeated by the GOP, the conservative propaganda news industry, and the religious right.
As for that other thing about "normalizing," "sexualizing," and whatever other talking points Ms. Greene wants to throw at us, let me speak on that in another way:
Girlfriend think she's cute but on this note, she needs to check herself. She shouldn't get it twisted simply because members of Congress tolerate her hot messes. LGBTQ people have neither the time nor energy to tolerate mess. We've had to deal with with ignorant folks trying to stigmatize and dehumanize us before and we never took a backseat and allowed it to happen.
Granted, this is not the first time she has come after the LGBTQ community, so this is nothing new.  But before continuing to spout off at the mouth, Ms. Greene needs to take a tip. The LGBTQ community have been through fights like these more times than we can count. Hell, we are still going through it. We determine who we are and how we are seen. We should already have that right as Americans, but unfortunately because of people like Ms. Greene, we have to fight for it.  And we do NOT fight to lose. We fight for ourselves, our families, and future generations. We will not allow our lives to be stigmatized or diminished to suit the inflated sense of entitlement of homophobes, bigots and all-around ignorant people.
That especially includes a bothersome young Congresswoman whose 15 minutes of fame is steadily running out.
Don't come for the LGBTQ community unless we send for you, Ms. Greene. And we won't be sending for you any time soon.
Posted by BlackTsunami at 4:44 PM