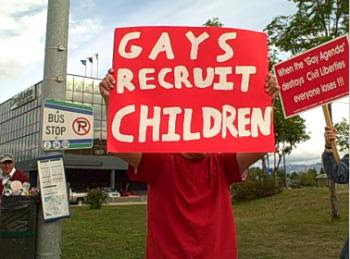 Bigotry will never go away. It's probably as old as the Earth itself and will remain here even when those of us reading this blog have long since passed away. The key is not eradicating bigotry, but recognizing it in all of its forms. And also the fact that those who push bigotry have innocuous ways of going about their nefarious business.
When it comes to opposition to the LGBTQ community, said bigotry seems to be always wrapped up in deceitful phrases and soundbites which designate us as a people seeking to cause harm. Especially to children.

Back in the day when they had more power and we had less visibility, there was no second guessing what groups like the Family Research Council and their spokespeople were saying about LGBTQ people. They could just outright say that we want children for sexual activity and then leave it to the fear and ignorance of their audience to paint the disgusting picture.
However as things have shifted in our favor in terms of visibility and education, they use more skillful ways of pushing that false argument. At times, they rely on an intricate network of dark money and media slick spokespeople fronting astroturfed groups and amplified by biased media entities. The ugly connotation remains the same, but the pattern it pushes is more intricate.
Check out the following excerpt from a recent Family Research Council post:

. . . In Saint Paul, Minnesota, moms and dads are furious about the district's "Office of Equity" foisting transgenderism on pre-schoolers. Thanks to a quiet partnership with radical groups like OutFront Minnesota, even toddlers are being exposed to messages that the American College of Pediatricians calls "child abuse." Books like When Aidan Became a Brother and I Love My Colorful Nails started trickling into local districts, aimed at children as young as three. One handout tells teachers to "Ask Students for Name and Pronouns" and to "Refer students to the Name/Gender Change Request Form."

Sounds scary, doesn't it? Except for the fact that this claim by FRC about 'transgenderism being forced on toddlers' comes from an article pushed by The Daily Signal,  an extension of  The Heritage Foundation which a conservative think tank. The purpose of The Daily Signal is to amplify conservative claims and causes under the guise of objective journalism.
And the specific claim in the article comes from a group called Parents Defending Education which, according to the National Education Association, claims to be a grassroots group but isn't:

An investigation conducted by NBC News in June identified at least 165 local and national groups across the U.S. working to turn disagreements over COVID mandates and lessons on race and gender into divisive wedge issues that can be manipulated for political purposes. Many of these groups are directly or indirectly supported by larger conservative think tanks, media outlets, and organizations that amplify cultural grievances around education to galvanize voters. The outrage machine surrounding CRT, public schools, and local school boards has already led to legislative responses. Education news outlet Chalkbeat identified 28 states that have attempted to “restrict education on racism, bias, the contributions of specific racial or ethnic groups to U.S. history, or related topics.”

And according to Media Matters:

A recently released IRS filing for the right-wing activist group Parents Defending Education (PDE), which was founded to promote the ongoing scare campaign against the supposed teaching of “critical race theory” in schools, reveals the symbiotic relationship between the right-wing media echo chamber and conservative political activists stoking a cultural panic.
The group’s president, Nicki Neily, has appeared on Fox News as part of the network’s dishonest coverage of efforts by school board officials and the FBI to respond to threats and harassment. But Neily is not just a parent defending education, as she has a long history of managing right-wing organizations funded by the Koch brothers and Bradley Foundation networks. .
. . Another director of PDE is Edward Blum who has a long association with right-wing funding networks that have backed his challenges to civil rights laws. These challenges include a successful case in 2013 in which the conservative majority on the U.S. Supreme Court struck down key protections of the Voting Rights Act.

In addition, PDE not only has articles written astroturfing its efforts. A certain news network goes out of its way to also amplify its claims:

On December 8 and 9, Fox News brought in two anti-CRT activists, Nicole Neily and Harry Jackson, respectively, to discuss why the removal of Gender Queer and Lawn Boy from library shelves and the display was justified. Neily is the president of the activist organization Parents Defending Education and Jackson is its “parent advocate.” According to Media Matters’ internal database, Fox News hosted Neily at least five times and Jackson at least four times in 2021 to discuss CRT. In at least two of those appearances, Fox obscured Jackson’s ties to the group, instead framing him as a concerned parent.

Even FRC's inference that a legitimate medical group labels education about transgender people as 'child abuse' is wrong. The group it cites, the American College of Pediatricians, isn't considered to be a credible medical organization. It's an extremely biased group which attempts to push anti-LGBTQ lies and propaganda under the guise of legitimate science. It is designated as a hate group by the Southern Poverty Law Center.
In 2017, the group's president, Dr. Michelle Cretella, was rebuked by the Society for Adolescent Health and Medicine for several errors she made while attacking transgender healthcare in a published commentary.
Guess where Cretella's commentary was published? In The Daily Signal, i.e. the same place the Family Research Council cited for its claim about 'transgenderism being forced on preschoolers.'
It's rather an ugly full circle, don't you think?
Posted by BlackTsunami at 5:18 PM