Editor's note - I've always believed that knowledge is power, no matter how distasteful it is. That's why I am posting this.

One would think that after the recent shooting at Club Q, certain personalities would engage in some sincere introspection about the many ways they have smeared LGBTQ people with false claims that we are "grooming," "sexualizing," and "mutilating" kids.

Apparently to these folks, sincere introspection is for losers and doubling down on the lies you tell is the way to go.

Kurt Schlitcher is a writer at the conservative site Townhall (whose political editor is an openly gay conservative by the name of Guy Benson).  Schlitcher has over 454,000 Twitter followers: 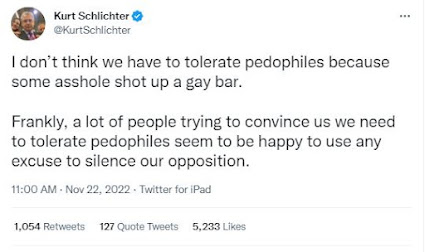 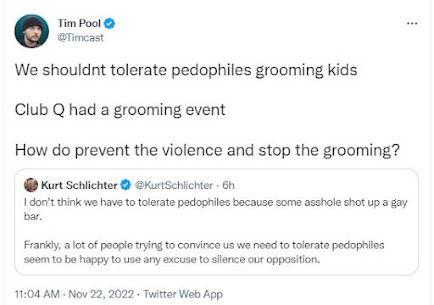 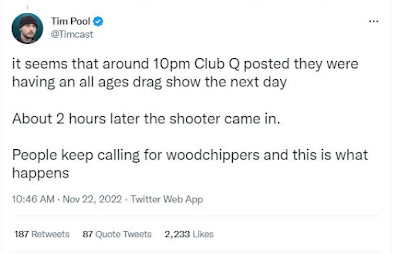 Pool is referring to an all ages drag show which would have taken place the next day. Calling it a 'grooming' event is a straight-up lie.  Pool is yet another conservative who has weaponized the word "grooming" in order to stigmatize LGBTQ people and minimize our culture into one solely about sexual intercourse. It's an updated version of the Anita Bryant claim from the 70s that "gays have to recruit kids to replenish their ranks." 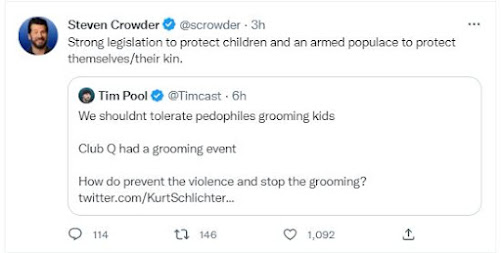 You can probably tell by looking at Crowder that in spite of his talk about being "armed," if someone handed him a gun, he'd "make lemonade and fudge" in his pants.

Let's be clear about a few things:

Drag shows are not inherently sexual.

Many drag shows are rather tame.

Children are not being sexually groomed by drag queens or Drag Queen Story Hour events.

Healthcare for trans kids is not mutilation.

This is what the LGBTQ community - particularly the transgender community - have been trying to tell the so-called mainstream all along. We aren't dealing with people who have simple difference of opinion or a "sincerely held religious beliefs."  We're dealing with posers, clout chasers, and people who simply don't give a damn about who gets hurt by their lies. Just as long as they get what they want.

Five people are dead and 25 others are wounded. And while the shooter's motives is not yet known, the manner in which these three bozos closed ranks, actually justifying the shooting, says a lot.

Posted by BlackTsunami at 5:09 PM

I can't help but wonder if these people just get off on click-baiting and racking up "followers". Their "content" has proven ability to achieve both those aims. In Anita Bryant's day there was no social media or internet. These platforms are being used to incite hate and violence in some people who might otherwise not give it a thought. Did our founding fathers ever imagine the First Amendment going off the rails?

@Frank
IIRC, one of Carlson's colleagues screwed up and was getting a lot of flack for it, and Carlson was jealous of the attention. I think a lot of those idiots are just bomb throwers and doing it for the lol's and the attention. The fact that they're doing it to a marginalized group makes it easier for them to escape consequences.

If they actually cared about predators of children, then they'd storm the churches, where everyday a new story about predator priests and youth pastors comes out daily!