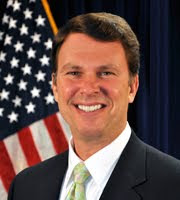 John Berry is President Obama's director of the U.S. Office of Personnel Management.

He is also openly gay and according to the Family Research Council (FRC), he is also proof that the ENDA (the Employment Non-Discrimination Act) is some type of nefarious plans by the gay community to gain "special rights." Tony Perkins, head of the FRC, said the following in an email:

If ENDA becomes law, the government will order businesses -- including faith-based businesses -- to cast aside their personal beliefs and hire homosexuals and cross-dressers, even if the employer considers these lifestyles immoral and inappropriate for their business.

Even groups like the Boy Scouts and child care providers aren't exempt from the bill's oppressive demands.

Worse still, ENDA will make it easier for activist judges to overturn the federal Defense of Marriage Act -- the most important protection for marriage that exists in our country!

I know that because the most powerful open homosexual in the Obama administration says it will:

John Berry, the director of the federal personnel office, says: "If we can get ENDA enacted and signed into law, it is only a matter of time" before pro-family, pro-marriage laws topple under its weight.

Even without FRC's track record for relying on distortions and fear tactics, it's easy to see that the organization's email contains a complete bastardization of Berry's words.

According to the Washington Blade (by way of lgbt-positive webpage Queerty and the anti-gay web page Americans for Truth), Berry was addressing Out for Work’s national convention at the Westin City Center Hotel in D.C. in September of last year and this is what was actually said:


Berry advocated for the importance of ENDA — and identified repeal of “Don’t Ask, Don’t Tell” and the Defense of Marriage Act as other priorities — in response to an audience member’s question about possible legislative issues on the horizon and criticism that President Obama isn’t moving quickly enough on LGBT issues.

“The most important thing we can do right now is we got to … secure the passage of the Employment Non-Discrimination Act — and it’s got to include full transgender protections,” Berry said. “I believe that if we all concentrate our efforts where it needs to be concentrated, which is on the House of Representatives and the United States Senate, we can get the job done.”

Other pro-LGBT legislation can be more easily achieved, Berry said, if Congress were to pass ENDA.

“If we can get ENDA enacted and signed into law, it is only a matter of time before all the rest happens,” he said. “It is the keystone that holds up the whole bunch, and so we need to focus our energies and attention there.”

This is what Berry said about DOMA:


Berry noted that Obama has called DOMA [discriminatory] and urged for its legislative repeal, but the OPM director added the best way toward overturning the law would be through the courts and not Congress.

“I will tell you personally I believe that I think the courts will strike this down before Congress will have to repeal it legislatively,” he said. “And thank goodness because, in this case, the backbone is not there in Congress.”


Now some may argue that the definition of a  "pro-family" law is up for interpretation, therefore there may not have been any distortion of Berry's quote on that point.  This is a matter of perspective. Clearly to FRC, anything that benefits the gay community is not pro-family,  in spite of the fact that a myriad of lgbt families populate this country.

However in regards to so-called "pro-marriage" laws,  Berry in no way said that ENDA would make it easier for judges to overturn DOMA. He merely said that litigation through the courts could overturn DOMA.

Whatever the case may be, for FRC to claim that Berry said "If we can get ENDA enacted and signed into law, it is only a matter of time" before pro-family, pro-marriage laws topple under its weight is a deliberate misinterpretation of his words.

And for those familiar with FRC's habit of claiming angel wings while hiding its horns and pitchfork, it's business as usual.

The Family Research Council continues to use 'outdated' work

Posted by BlackTsunami at 7:56 AM

OMGs!!! As a freelance historian I find this extreme bit of "out of context" Fallacy commited by the FRC personally offensive! And, much of the "Right's" bigotry is able to remain as a consequence of Americans having so little understanding of History, such as Marriage and that Gay people were once revered. It is simply infuriating to me that they keep, again and again, insisting on imposing their personal religious beliefs onto a secular and even atheistic infrastructure, as if they are one-and-the-same, and the media/ civil officials are NOT challenging them on these grounds!

Personally, I pray to my Gods that I live to see the day when folks like the FRC are publicly shunned the way that the KKK is today!