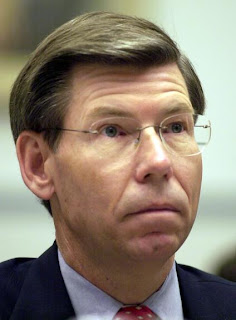 One would think that after being embroiled in a scandal that rocked Florida, the religious right, and his gubernatorial aspirations, Florida Attorney General Bill McCollum would change his negative opinion of gay adoption, the very reason for the scandal.

MCCOLLUM: Well, I personally don’t think so, but that is the law.
Q: Should the law be changed?

MCCOLLUM: I think that it would be advisable. I really do not think that we should have homosexuals guiding our children. I think that it’s a lifestyle that I don’t agree with. I realize a lot of people do. It’s my personal faith, religious faith, that I don’t believe that the people who do this should be raising our children. It’s not a natural thing. You need a mother and a father. You need a man and a woman. That’s what God intended.

And here I thought God always commanded us to stand for truth. I guess I didn't get the memo McCollum received.

But we now see the  reason why McCollum pushed in fighting for Florida's ban against gay adoption in spite of the fact that his office at first couldn't find any "experts" to speak on their side,

and the reason why George Rekers was the "expert" chosen in spite of the fact that McCollum's staff warned him that Rekers had credibility problems,

and the reason why McCollum is still pushing against gay adoption even after his case was soundly defeated in court and his office frittered away over $100,000 dollars to Rekers.

That reason being - McCollum's personal beliefs tells him that gay adoption is wrong. Never mind being destroyed in court and never mind the all of the research which demonstrates his position to be wrong because those things don't matter.

But something must be noted here and needs to be the topic of discussions that go beyond blogs.

In two cases (this one and the case of Proposition 8), we are seeing the dangers of people sacrificing truth for personal beliefs.

In the case of Proposition 8, when the reality that same sex marriage is harmless wasn't to the liking of some folks, they manufactured a plethora of phony data to say that it was.

In this case in Florida, McCollum isn't manufacturing false data. He is doing much worse by saying "to hell with the data" and "to hell with reason and accuracy. Gay adoption is wrong because I think so."

When people can push phony data or push aside accurate data with a public assurance that they are doing so in God's name, I think there are bigger problems in this world than the so-called "homosexual agenda."

After all, us "homosexuals" aren't the ones lying with impunity.

Posted by BlackTsunami at 3:43 PM

IT IS OBVIOUS THAT REKERS WAS A STEALTH DEMLIB PLANTED TO MAKE PRO-AMERICANS LOOK BAD!!!!!

MCOLLUM'S LAPSE OF JUDGEMENT IN THAT CASE IS NO REASON TO HAND AMERICA'S ORPHANED CHILDREN OVER TO SODOMITES AND DOUGHNUT-BUMPERS!!!!

Baby, you have GOT to take your medication before putting a comment on my blog.

The only reason why I am letting your comment and link to your site stay up is because I am hoping that it brings others as much comic pleasure as it brought me.