LGBT community should fear the thought of 'Senator' Christine O'Donnell 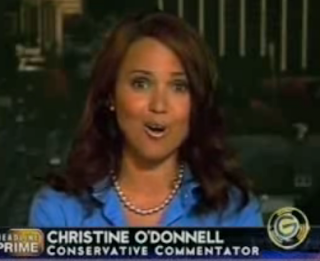 Christine O'Donnell's victory last night was a gamechanger on so many fronts.

For one the emphasis is off of the supposed Democrat electoral slaughter in November and is now on one of the backstories everyone was  ignoring - the crisis of leadership in the Republican Party.

And now O'Donnell, whose victory in the Republican Delaware Senate primary over establishment pick Mike Castle (thanks to out of state tea party money and Sarah Palin) has made her the new media star for a time.

But as long as she is running and is not taken as a serious challenger, she can easily sneak up and win, especially when she is backed by the money and influence of the tea party.

And this doesn't bode well for the lgbt community. She used to be a spokesperson for anti-gay Concerned Women for America.

That's the organization which, amongst other things, blames the lgbt community because young black men aren't graduating, stands against the repeal of DADT,  and who at times cites the discredited work of Paul Cameron.

This is the type of person who can be a United States Senator and it should scare the lgbt community.

It's one thing to have Family Research Council head Tony Perkins called as "expert witnesses" in front of Congress.

But having someone like O'Donnell in Congress is like having a rabid fox trapped in a henhouse.

So the lgbt community and the Democratic Party in general should be careful. Don't laugh O'Donnell into Congress.

Posted by BlackTsunami at 4:47 AM